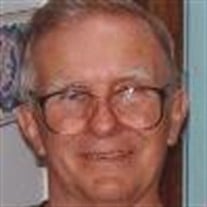 Harry A. Augevich, 80, longtime resident of Lawrence, passed away surrounded by his devoted family on April 28, 2018 at Lowell General Hospital after a long illness. Harry was born August 27, 1937 to the late Anthony and Marion (Smith) Augevich in Lawrence. A devout lifelong Catholic, he graduated from Central Catholic with the Class of 1954 and he was a longtime communicant of St Patrick Parish in Lawrence. Harry was a Korean War veteran who enlisted in 1954 and was honorably discharged from the United States Army in 1957. After his service to the country, he attended Merrimack College and obtained his degree in electrical engineering. Harry was a devoted and selfless man who was a devoted Boston sports fan and loved politics. He was a member of the Ward Six Club and was also a bar tender there as well. Harry worked for many years as a postal carrier for the Lawrence post office until his retirement. He touched many lives in many different circles and will fondly be cherished, loved and missed. Harry is survived by his beloved daughter, Darlene Morency and her husband Duane, of Lowell. He was the proud grandfather to his grandson, Derek Days and his wife Pattiann of Stoneham and his two great granddaughters, Carina and Aubrey. Harry is also survived by his aunt Mildred Lynch and her husband Bernie of Lawrence and two nephews Billy and Michael. He was preceded in death by his sister, Marian Savage, and his longtime companion, Mary Cataldo. Visitation for Harry will be held on Tuesday, May 1, 2018 from 4 – 8 PM at the Kenneth H. Pollard Funeral Home, 233 Lawrence Street, Methuen. Friends and family are cordially invited to attend. A Mass of Christian Burial will be celebrated on Wednesday, May 2, 2018 at 11 AM at St Patrick Parish, 118 S Broadway, Lawrence. Interment to follow with military honors at Holy Sepulchre Cemetery, Waverly Road, North Andover. The family would like to thank the staff at the Westford House for the devoted and compassionate care they provided to Harry. To leave an online condolence, please visit www.Pollardfuneralhome.com. The Kenneth H. Pollard Funeral Home is proud to serve the Augevich family.

Harry A. Augevich, 80, longtime resident of Lawrence, passed away surrounded by his devoted family on April 28, 2018 at Lowell General Hospital after a long illness. Harry was born August 27, 1937 to the late Anthony and Marion (Smith) Augevich... View Obituary & Service Information

The family of Harry A. Augevich created this Life Tributes page to make it easy to share your memories.