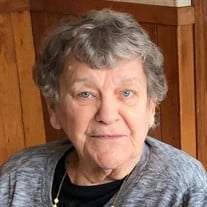 It is with great sadness that we announce the passing of our beloved mother, Gloria Patricia (Gaumond) Robichaud. She passed away at home on Tuesday, December 7, 2021, after a period of declining health. She was eighty-nine years old. Gloria was born in Lawrence, MA, on March 17, 1932. She was the daughter of the late Armand and Melina (Pellerin) Gaumond, and was the fifth oldest of what would become a family of seven children. Of her siblings, she is survived by a sister, Lucille Baillargeon; and a brother, Robert ‘Bobby’ Gaumond, both of Southern NH. Gloria was the beloved wife of her first love, Ronald O. Robichaud (1925-1997), whom she married on November 23, 1950. Not long after, he built their Methuen home where they would eventually raise five boys. It was here that Gloria spent much of her life’s energy as a devoted homemaker, raising her children, and creating a beautiful home life for her husband. It was also where she would live until her passing. She is survived by all five of her sons: Dennis Robichaud and his wife, Donna; Richard Robichaud; Kevin Robichaud and his wife, Jill; Brian Robichaud and his wife, Cecilia; and Jody Robichaud. All reside in the Methuen/Southern NH area. She is also survived by several grandchildren, great-grandchildren, nieces, and nephews. Gloria took to the work place later as life permitted, and once her kids were all old enough. One early career was as the housekeeper for the Rectory at St. Theresa’s Parish. Another period found her as the much-loved, friendly face behind the cash register of Merrill’s Market & Butcher Shop, and then at Robichaud Hardware, both formerly located in the Methuen Square. She would then later manage the Laundry Department of Northeast Rehabilitation Hospital Network in Salem, NH, for several years until her retirement. After her family, Gloria’s passion was for all things musical, whether she was herself performing or just a spectator. She was in fact an accomplished singer and piano player in her own right, performing in her youth in many local ‘minstrel shows’ and then for decades as the anchor of the low-voice section of the choir at the now-closed Mt. Carmel church in Methuen. She later found her musical outlet, many friends, and much delight, as both an ensemble member and as a featured soloist, with the Happy Hearts singing troupe at the Methuen Senior Center. Our mother was also an avid reader, colorer, and General Hospital fan. Many will also remember her warm greetings, an infectious laugh, strong opinions, animated conversations and reminiscing over coffee. She will be deeply and sorely missed. May the Lord heal the hole left in the hearts of those who knew and loved her while her memory remains forever with us. A celebration of life memorial will be held locally in the spring. The Kenneth H. Pollard Funeral Home is honored to serve the Robichaud Family.

It is with great sadness that we announce the passing of our beloved mother, Gloria Patricia (Gaumond) Robichaud. She passed away at home on Tuesday, December 7, 2021, after a period of declining health. She was eighty-nine years old. Gloria... View Obituary & Service Information

The family of Gloria Patricia Robichaud created this Life Tributes page to make it easy to share your memories.

It is with great sadness that we announce the passing of our...