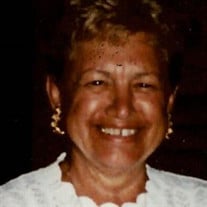 Gloria A. (Bretton) DeGaspe, 92, longtime resident of Methuen, passed away peacefully surrounded by her beloved family on February 23, 2020 at Mary Immaculate Nursing and Restoration Center in Lawrence. Born on May 7, 1927, raised and educated in Methuen to the late Peter and Jeanne (Oullette) Bretton she attended Searles High School. During high school Gloria studied to be a seamstress under Rose Frank. She continued creating, making and designing clothing and gowns for family and friends. A lifelong devoted Catholic, Gloria was a communicant of Mount Carmel Church, where she was also a member of the bingo club for over 25 years. She worked for many years as a technician for Wang Laboratories. Gloria often travelled with her siblings, enjoyed the occasional trip to Foxwood’s and loved going on cruises. As the cherished matriarch of her family, Gloria was a kind, caring, and selfless soul who would often advocate for those who less fortunate than herself. She touched many lives in many different circles and will fondly be loved, cherished and missed by all. Gloria is survived by her four loving children; her daughter, Barbara J. DeGaspe, her son John M. DeGaspe & his wife Diane, her daughter Lee Ann Morin & her husband Ghislain, an her daughter Darleen M. DeGaspe, all of Methuen. She is also survived by her nine grandchildren and seven great grandchildren. Gloria is also survived by four siblings; Claire Boisvert & her husband Richard, Pauline Freeman, Norman Bretton, all of Methuen, Ronald Bretton and his wife Mildred of Windham, NH and several nieces & nephews. In addition to her parents, Gloria was preceded in death by her dear husband George E. DeGaspe Jr in 1974 and her daughter and son-in-law Donna M. Hill & her husband Alfred Harwood Jr. She was also predeceased by four of her siblings; her brothers Roger, Richard, Russell Bretton and her sister Rosemary Bretton. Visitation for Gloria will be held on Sunday, March 1, 2020 from 1 – 5 PM at the Kenneth H. Pollard Funeral Home, 233 Lawrence Street, Methuen. Family and friends are cordially invited to attend. A Mass of Christian Burial will be celebrated on Monday, March 2, 2020 11AM at Saint Monica’s Parish, 212 Lawrence Street, Methuen. Interment to follow at the Elmwood Cemetery, 110 North Lowell Street, Methuen. To leave an online condolence or for directions, please visit www.pollardfuneralhome.com. The Kenneth H. Pollard Funeral Home is proud to serve the DeGaspe family. In lieu of flowers, donations can be made to Mary Immaculate Nursing/Rehab Center, 172 Lawrence Street, Lawrence, MA 01841.

Gloria A. (Bretton) DeGaspe, 92, longtime resident of Methuen, passed away peacefully surrounded by her beloved family on February 23, 2020 at Mary Immaculate Nursing and Restoration Center in Lawrence. Born on May 7, 1927, raised and educated... View Obituary & Service Information

The family of Gloria A. (Bretton) DeGaspe created this Life Tributes page to make it easy to share your memories.