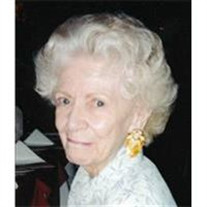 Gloria Ann O?Brien, 89, of North Andover (formerly of Tower Hill, Lawrence) passed away on February 11th at the Lawrence General Hospital, surrounded by her daughters. She was born in Worcester, daughter of the late William and Eileen (Martin) McManus. After graduating from St. Mary's High School in Lawrence, Gloria married her beloved Frank and became a devoted mother to her four daughters and one son. She enjoyed using her creative talents by volunteering with the St Augustine?s Mothers' Guild. Gloria was fiercely devoted to her family. She was an excellent cook and loved entertaining family and friends. Gloria was pre-deceased by her husband Francis J. O?Brien. They both dedicated their retirement years to caring for their grandchildren. Gloria was also predeceased by her son Francis O?Brien Jr. and her brothers Joseph and William McManus. She is survived by her beloved sister and best friend Julie McManus. She leaves her adoring daughters Chris Caron and her husband Ed of North Kingstown RI, Gigi Bartlett and her husband Kent of Alexandria VA, daughter in law Joanne of West Deptford NJ, Maggi O?Brien of North Andover with whom she resided, Julie Kfoury and her husband Steven of Lawrence. "Gog" leaves her loving grandchildren: Ted Caron and his wife Katie, Christie Giroux and her husband Michael, Michaela Caron, Maggi Bartlett and her wife Amanda Geggatt, Trini Baker and her husband Andy, Tara Morda and her husband Anthony, Steven, Kaleigh, Dan, and Bob Kfoury, and her great-grandchildren Andy, Lizzie, Grace, Nate, Emma, Frankie, Payton, Taylor and several nieces and nephews. Calling hours are on Friday February 20th from 4-7 PM at the Kenneth H. Pollard Funeral Home -233 Lawrence Street in Methuen. A Funeral Mass of Christian Burial will take place on Saturday February 21st at 10 AM at St. Michael?s Church in North Andover with burial to follow at St. Mary Immaculate Cemetery in Lawrence. In lieu of flowers memorial contributions in Gloria?s honor may be made to Alzheimer?s and Dementia Association 480 Pleasant St. Watertown, MA 02472 or St. Michael?s School 80 Maple Avenue No. Andover, MA 01845. A special heartfelt thank you to her daughter Maggi who was her most trusted caregiver for many years. Thank you also to Gloria?s other caregivers Helen and Annette, Dr. Glenn Newsome, The Palliative Care Team and the staff on H-2 at the Lawrence General Hospital. The Kenneth Pollard Funeral Home is honored to be assisting the O?Brien family through this difficult time.

Gloria Ann O?Brien, 89, of North Andover (formerly of Tower Hill, Lawrence) passed away on February 11th at the Lawrence General Hospital, surrounded by her daughters. She was born in Worcester, daughter of the late William and Eileen (Martin)... View Obituary & Service Information

The family of Gloria Ann O'Brien created this Life Tributes page to make it easy to share your memories.