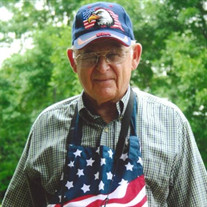 Girard R. Gagnon, 83, known to loved ones and friends as “Jerry” or “Pops”, passed away peacefully, and surrounded by love, at Lawrence General Hospital in the early morning hours on Saturday, March 17, 2018. A life-long resident of Methuen, MA, Jerry was born on August 3, 1934 in the Gagnon family home where he was residing. The family would like to thank the Lawrence General ER and ICU staff that worked diligently to make Jerry's transition to heaven peaceful. In his early years, Jerry was formally educated at Mount Carmel School. He was an honored veteran who served his country as an Army cook during the Korean War. From 1957 until his retirement on August 3 1989, he was employed by U.S. Navy, Supship Boston. Jerry began his civilian career with the U.S. Navy as a Machinist Specialist and retired as a Supervisor of Shipbuilding. An avid gardener, he enjoyed planting flowers, which you could see proudly displayed throughout his beautiful and meticulous yard. Post-retirement, Jerry adored spending time with family, especially his grandchildren with whom he was always happy to share gardening tips. He also enjoyed cooking and was always ready to serve friends and family one of his "famous omelets or stir-fry surprises." Jerry's profound love for family, friends, flowers, food and fun came together every year for his annual Fourth of July cookout. This was a time to celebrate everything he valued and spend time with the people he enjoyed most. It was also a time to showcase his beloved backyard. In addition, he enjoyed bowling, photography and playing cards. Most of all he enjoyed his backyard. He was the beloved husband and best friend to Marie A. Gagnon (Saulnier), with whom he shared 57 years of marriage. Their time together was a real-life love story, which was a blessing to have witnessed. He was a devoted father to Keith Gagnon of Methuen, MA, Cynthia (Cindy) Plourde of Derry, NH, and Todd Gagnon and his wife Beth of Salem, NH. He was a loving Pops to three beautiful grandchildren Christina Plourde, Makayla Plourde and Noah Gagnon. As one of twelve children, he is survived by siblings Donald Gagnon of Methuen, MA, Linda Houde of Kingston, NH, and Carol Branchaud and her husband Roger of Kingston, NH. Family, friends and guests are invited to honor and celebrate Jerry's life by gathering for calling hours on Saturday, March 24, 2018 from 9:00am to 11:00am, with a funeral service to immediately follow, beginning promptly at 11:00am at the Kenneth H. Pollard Funeral Home, 223 Lawrence St. Methuen, MA. A burial service will then commence at the Elmwood Cemetery, 130 North Lowell Street, Methuen, MA. Memorial donations can be made to the Alzheimer's Association, 309 Waverly Oaks Rd. Waltham, MA 02452. Jerry was a man of quiet faith and his final words, which will be forever imprinted in our hearts were, "Jesus loves you and so do I."

The family of Girard R. Gagnon created this Life Tributes page to make it easy to share your memories.