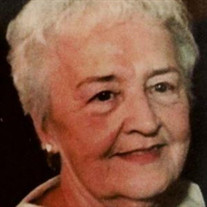 Gertrude “Trudy” Irene (Lemire) Buote, a resident of Methuen for most of her life, died on Wednesday, March 25, 2020 surrounded by her loving family at Nevins Long Term Nursing Facility. She was 91 years old. Born on November 3, 1928 in Lowell, Massachusetts, Gertrude was the daughter of the late Oliva Lemire and Adrienne (Dupuis) Lemire. She grew up in Lawrence, Massachusetts and attended St. Anne’s Grammar School and High School. Although mostly a stay-at-home mother, Trudy worked several years in the office of Almy’s Department Store in the 1970s. While at Nevins, she was unanimously elected by her fellow residents to serve as President of the Resident’s Council. Her happiest times were spent when she was with her family and the years she spent babysitting her grandchildren and afterwards even her great grandchildren. She was very active years ago when she and her husband together were Adult Advisors for St. Theresa’s Catholic Youth Organization (CYO) and also bowled together for many years in a bowling league. She always loved dancing and spent many Saturday nights at The Commodore Ballroom in Lowell and The Ballroom at Canobie Lake listening to Big Band music. Another of her favorite pastimes was playing 45s, which she continued to excel at and enjoy until just a few weeks ago. Trudy will be greatly missed by her children, daughters Susan, wife of TJ Comeau of Hampstead, NH, Pamela, wife of Martin Dallon, sons Steven and wife Linda Buote and Michael Buote, all of Methuen. Trudy also leaves seven grandchildren, Kelli Buote, Christopher Comeau, Catherine Cioni, Matthew Buote, Jennifer Page, Nicholas Buote and Alexis Buote as well as eleven great-grandchildren, Jacob, Boston, Trevor, Ricky, Joey, Madison, Jack, Elizabeth, Sammy, Travis and Tommy. She also leaves behind many nieces and nephews. Trudy was predeceased by her husband Russell Buote, who passed away in 1994, her parents and her brothers Jean-Leon Lemire and George Lemire. The family would like to thank the nursing staff at Nevins for their care while Trudy was a resident there for the past two years and Beacon Hospice for their compassion during Trudy’s last few weeks. Due to the current pandemic situation, a private graveside service will take place for the immediate family. A Celebration of Life church service will take place at a later date. In lieu of flowers, memorial donations in Trudy’s name may be made to Nevins Nursing and Rehabilitation Facility, 10 Ingalls Court, Methuen, MA 01844 or Beacon Hospice, 290 Merrimack Street, Suite 242, Lawrence, MA 01843.

Gertrude &#8220;Trudy&#8221; Irene (Lemire) Buote, a resident of Methuen for most of her life, died on Wednesday, March 25, 2020 surrounded by her loving family at Nevins Long Term Nursing Facility. She was 91 years old. Born on November 3,... View Obituary & Service Information

The family of Gertrude "Trudy" Irene (Lemire) Buote created this Life Tributes page to make it easy to share your memories.