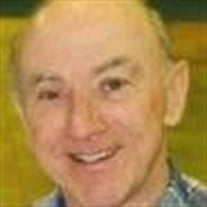 Gerard “Jerry” A. Parent, 90, of Methuen, passed away on Tuesday, December 27th, at the Nevins Nursing and Rehabilitation Centre in Methuen. Jerry was born and raised in Lawrence. He attended Central Catholic High School in Lawrence before enlisting in the U.S. Army. On January 6, 1951, he married the love of his life, Theresa (Bedard), with whom he shared 66 years of marriage. He and his wife settled in Methuen to raise their family. During his career he worked at the Oxford Paper Company and then later for Malden Mills until his retirement. Jerry was a devoted Boston Sports Fan, he enjoyed taking care of the family home and woodworking in his spare time. He and his wife Theresa were members of and enjoyed traveling with the Rainbow Club of St. Theresa’s. He was also a member of Mt. Carmel Church, prior to its closing and more recently a member of St. Monica’s Church, Methuen. Jerry leaves his loving wife, Theresa (Bedard) Parent of Methuen, a son, Ronald Parent of Manchester, NH, daughters Anne Foster and her husband Robert of Danville, NH and Joanne Parent of Rochester, NH, 8 grandchildren, 6 great-grandchildren and several nieces and nephews. Jerry is predeceased by his daughter Mary Parent and his 3 sisters. Friends are invited to call on Thursday, December 28th, from 3-7 p.m. at the Kenneth H. Pollard Funeral Home, 233 Lawrence Street, Methuen. His Mass of Christian Burial will take place on Friday, December 29th, at 9 a.m. at St. Monica’s Church, 212 Lawrence Street, Methuen. Burial will follow at St. Mary/Immaculate Conception Cemetery, 29 Barker Street, Lawrence. In lieu of flowers, memorial contributions may be made to St. Monica’s Church, 212 Lawrence Street, Methuen, MA 01844. For directions or to make an online condolence please visit www.pollardfuneralhome.com. The Kenneth H. Pollard Funeral Home is honored to serve the Parent family.

Gerard &#8220;Jerry&#8221; A. Parent, 90, of Methuen, passed away on Tuesday, December 27th, at the Nevins Nursing and Rehabilitation Centre in Methuen. Jerry was born and raised in Lawrence. He attended Central Catholic High School in Lawrence... View Obituary & Service Information

The family of Gerard "Jerry" A. Parent created this Life Tributes page to make it easy to share your memories.