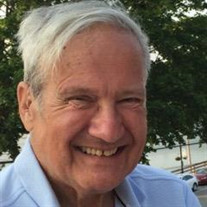 Gerald “Jerry” Franklin White, 87, passed away peacefully on Saturday, October 9, 2021 surrounded by his loving family. Jerry was born of humble beginnings to Charles and Beatrice White (Sher) on March 12, 1934. Upon his graduation from Lynn Classical High School in 1952, he joined the Air Force during the Korean Conflict, stationed in Iceland. In 1963, he and his new bride, Georgiana “Georgi” Kachadorian White, moved into their first and only home on Quincy Street until Georgi’s passing in 2018. They loved this home and cared for it with great intention, raising their 2 children and becoming ballasts of both their neighborhood and community. Georgi often made the comment that Jerry, “always came home with a smile on his face.” With his wife’s blessing, support of his mentor, Sid Soreff, and his natural gift of numbers, he found his love of real estate, and Gerald F. White Realty, was born. For nearly fifty years, Jerry invested, both financially and personally, in over 100 multi-family apartments and rooming houses, creating “homes” for his tenants. Although he was rewarded financially for his entrepreneurial efforts, he never took any of it for granted. Honoring his promise to his mentor and the Jewish belief in, “paying it forward,” Jerry took great pride in mentoring and coaching those who sought his passion and vision and shared in the celebration of the successes of several, now prominent community real estate investors. As a father, he provided the same guidance and work ethic to his children. In addition, he taught them the value of serving their community, standing up for the underdog and fierce commitment to doing the right thing however unpopular it may seem. He shared that same wisdom with his granddaughters, in Atlanta, where he spent the last few years of his life. Jerry was a fierce advocate and believer in the YMCA and its imperative role in supporting the community. His involvement in the Lawrence Y spanned over forty years as a member and major donor. He was a steward serving the Merrimack Valley YMCA Board, the Lawrence YMCA Board of Managers and the Heritage society. While on the Board of Directors, the discussion to close the Y and merge with its Andover counterpart, was thwarted by Jerry’s words, “not over my dead body.” He chaired the Capital Campaign raising enough money in its inaugural year to keep the Y open. His legacy continues on as the Lawrence YMCA is thriving in the community and continues to grow through programs such as Food Insecurity, housing, health and wellness and numerous Youth Development initiatives. In addition to the Y he has also served as President of several community and professional boards including The Greater Lawrence Psychological Center, Daybreak Shelter, and Greater Lawrence Realtors Association. His spirit, gentle wisdom, provocative humor, bottomless generosity and loyalty will be sadly missed. Jerry was preceded in death by his loving wife, Georgiana; brother, Sheldon; son-in-law, George Tyrones; sister-in-law, Marion Kachadorian Palanjan; nephew, Nathaniel Kachadorian; and his parents. He is survived by his children, Erik White of Montclair, New Jersey, Andrea White Tyrones of Atlanta, GA; adoring granddaughters, Ava and Ariana Tyrones; brothers and sisters- in-law, Jim & Lea Kachadorian of Woodstock, VT, Elaine Kachadorian of Amherst, NH, and Jerry Palanjian of Newport Beach, CA; loving nieces and nephews, Jennifer Sammataro of Andover, MA, Jessica Rankin of Newport Beach, CA, Sheryl White Vincent of Marblehead, MA, George Kachadorian of Lee, NH, James Sammataro of Miami, FL, and Alex Palanjian of Laguna Hills, CA. Visitation and memorial service will be held at Kenneth H. Pollard Funeral Home, 233 Lawrence Street, Methuen, MA, on Saturday, October 23, 2021 from 11:30 AM- 2:30 PM. The family requests fully vaccinated guests only. Masks will be provided. In lieu of flowers, a donation made in his memoriam to the Merrimack Valley YMCA, 40 Lawrence Street, Lawrence, MA, 01840 or online at: https://operations.daxko.com/online/3101/OnlineGiving/Donation.mvc?campaign_id=21289. The Pollard Funeral Home is honored to serve the White family.

Gerald &#8220;Jerry&#8221; Franklin White, 87, passed away peacefully on Saturday, October 9, 2021 surrounded by his loving family. Jerry was born of humble beginnings to Charles and Beatrice White (Sher) on March 12, 1934. Upon his graduation... View Obituary & Service Information

The family of Gerald F. White created this Life Tributes page to make it easy to share your memories.