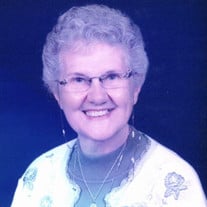 Georgette C. (Morency) Beaulieu of Kittery, Maine died peacefully on February 26th at Portsmouth Regional Hospital at age 93. In the days preceding her death she was surrounded by her family and showered with their love and gratitude at having been a small part in the extraordinary legacy Georgette has left behind. Georgette was born to the late Albina and Arthur Morency in Lawrence, Massachusetts on August 30, 1927. Her early years were full of love and joy shared with her parents, four siblings, classmates at St. Anne’s High School, church community, and many friends. She was fond of recounting trips to her parents’ lake camp where she would “live in the water”, Sunday outings to the movie theater with either half a pint of ice cream or a piece of chocolate, and working at Rouselle’s clothing store in Methuen, MA, before she was married. Georgette was married to Laurent Beaulieu in 1947 and spent many happy years raising her family of eight children and her beloved dog, Jake, in Salem, New Hampshire. Georgette’s family was her pride and joy, and it was in her family that she exercised her incredible kindness, bottomless capacity for love, and selfless generosity most of all. She was an incredible cook who used to can her own vegetables from her family’s garden. Although she had always loved to read, Georgette used to say that when she found herself stirring a pot on the stove while balancing a baby on her hip, she had to give up reading for a while because she simply did not have enough hands. Her great love for reading never left her, though, and after her kids had all left the nest, one of her favorite afternoon and nighttime activities was reading a good book, especially after watching Wheel of Fortune, Jeopardy, or a Hallmark movie. Besides her family, Georgette’s proudest accomplishments would be her active participation in her church community and her career. Georgette was fiercely independent, resourceful, and hard-working. When her husband passed away in 1980 and she had four kids still at home, Georgette entered the workforce for the first time since she had been married and found that much had changed in the decades since she had last worked outside of the home. She took these changes in stride and learned the skills needed for jobs in the digital age, such as typesetting, which she learned when working for The Salem Observer. With each job she undertook, from her work at Merrimack College (very short period), Computer Vision, Goal QPC, Children’s Place, Portsmouth Pediatrics, and Sentry Hill, she learned new skills and found something to enjoy in each task. She worked until she was 86. Despite having a busy schedule of working and attending to her children (and later, her grandchildren and great-grandchildren), Georgette found the time to donate to numerous charities and to volunteer at church events. In all she did, from her career, to the leadership of her family, to her faith, and then, finally, to the way she embraced the aging process, she exhibited devotion, great skill, grace, dignity, and humility. Nothing made Georgette prouder than her kids, grandkids, great-grandkids, godchildren, and all her family. She was the ultimate “go to” person in terms of record-keeping in the Beaulieu family—if anyone had a question about the date that any of her dozens of descendants were born or married, all they had to do was give Georgette a call. Georgette is survived by her seven of eight children: Donna (and the late Durwood) Cannon; Ken (and Ruby) Beaulieu; Steve (and Martha) Beaulieu; John (and Jane) Beaulieu; Tom Beaulieu (and Darrin); Lisa (and Steve) Puffer; Joe (and Susan) Beaulieu; and predeceased by her son, Lawrence (“Buddy”) Beaulieu. Georgette (or “Jetty,” as everyone affectionately called her) is also survived by her sisters Jacqueline Provencher and Jeannette (and James) Frahm; and is predeceased by her brother, Paul Morency and her sister, Loretta Kulesz. Georgette (“Memere”) will be greatly missed by her 18 grandchildren and 26 great-grandchildren, who she spoiled with love, care, and sweets. Unfortunately due to the size of the family, funeral services is limited to family only. In lieu of flowers, donations can be made in memory of Georgette C. Beaulieu for a financial aid scholarship. All donations will go towards a scholarship. If gifts reach $25,000, a named endowed scholarship will be established in Georgette’s honor. Donation checks can be made out to: St. Thomas Aquinas High School, 197 Dover Point Road, Dover, NH 03820. Please write Georgette’s name in the memo field

Georgette C. (Morency) Beaulieu of Kittery, Maine died peacefully on February 26th at Portsmouth Regional Hospital at age 93. In the days preceding her death she was surrounded by her family and showered with their love and gratitude at having... View Obituary & Service Information

The family of Georgette C. Beaulieu created this Life Tributes page to make it easy to share your memories.