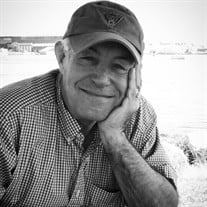 George F. Windisch, 73, of Londonderry, NH passed away peacefully at home surrounded by his devoted family. Born on July 23, 1945 to the late William J. and Philomena (Weidenhofer) Windisch in Pittsburgh, PA, George graduated from North Hills High School with the Class of 1963. After high school, like so many of his generation, George answered the call of duty and enlisted in the United States Marine Corps. After his honorable discharge, George continued his lifelong calling where he served for over twenty years as a Massachusetts State Trooper. His assignments included positions on the S.W.A.T and S.T.O.P teams, retiring as a staff sergeant and the commander for the Leominster State Police Barracks. While serving as a Trooper, George received his Masters in Criminal Justice from Boston University. After decades of service in law enforcement, George worked with the US Marshall service at the federal courthouse in Boston. George had a profound love for the outdoors and was a proud member of the Pelham Rod & Gun Club, where he could be found every Saturday. Known as the patriarch of his family, George was a devoted husband, father, grandfather and great-grandfather. Even though he was born and raised in Pittsburgh, George was a devoted New England Patriots fan. George lived a life of selfless devotion and service to others. He touched many lives in wide circles and will fondly be loved, cherished, and missed by all. George is survived by his beloved wife, Kathleen M. (Timlin) Windisch, and celebrated 31 wonderful years of marriage on July 10, 2019. He was a cherished father to his four children; his daughter Gretchen Berthiaume of Londonderry, son Matthew Windisch and wife Maria of Londonderry, son Kevin Stacy and wife Shannon of Bozeman, MT and daughter Virginia Favazza and her husband Ryan of Beverly, MA. George was adored by his seven grandchildren: Devin; Olivia; Lily; Anna; Ava; Colin; and Claire; and one great-grandchild, Leo. George is also survived by his brother William “Bill” Windisch Jr of Ohio and several nieces and nephews. In addition to his parents, he was preceded in death by his daughter Jennifer Windisch and his son-in-law Fran Berthiaume. Visitation for George will be held on Friday, July 19, 2019 from 4 – 8 PM at the Kenneth H. Pollard Funeral Home, 233 Lawrence Street, Methuen. Friends and family are cordially invited to attend. A funeral service will be held at the funeral home on Saturday, July 20, 2019 10 AM followed by military honors. To honor George’s wishes, interment will be privately held. To leave an online condolence, please visit www.pollardfuneralhome.com. In lieu of flowers, please make a donation in George’s memory to The Station Foundation, 1627 West Main Street, Suite 258, Bozeman, MT 59715 (www.thestationfoundation.org) . The Kenneth H. Pollard Funeral Home is proud to serve the Windisch family.

The family of George F. Windisch created this Life Tributes page to make it easy to share your memories.