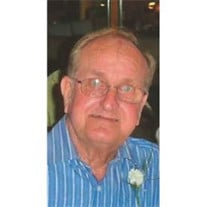 George Arthur Herman, 74, passed away October 12, 2013 surrounded by his family. George was born on July 14th 1939 in Boxford, MA son of the late Bernard and Hazel (Fuller) Herman-Morrison. George attended Schools in Boxford and Andover, MA. He worked as an Arborist for over 20 yrs at Valley Tree Service of Groveland, MA. He later moved on to Avco Systems Division of Wilmington, MA and then later retired as a Facility Maintenance Technician at Presidential Gardens of Bradford, MA. George?s favorite hobby was fishing with his sons and grandsons along with trips to Las Vegas or Foxwoods with his wife Lorraine. George?s life was centered around his loving family and watching the Red Sox! He was a handy man who had the knack to be able to fix anything. He also enjoyed playing cards and working on cars. George is survived by the love of his life, and wife of 53 years, Lorraine E. (Poore) Herman, 5 Children, 14 Grandchildren, and 5 Great Grandchildren. His son George and wife Donna of Derry, NH, their 6 Children: Scott, Christopher, Patrick, Matthew, George Adam and his girlfriend Sheena and her 2 kids, Dezirae and Zakary, and Dyana and her husband Oscar Figueroa and their 2 children, Christian and Noah. His son David, and wife Sandra of Pepperell, Ma and their 2 children, Devin and Caitlyne. Son, Michael of Lawrence, Ma and his daughter Amber of Nashua, NH. Daughter, Lori and her husband Paul Smith of Chester, NH and their 3 children: Ryan, Tyler, Kayla and her son Evan. And his son, Timothy of Lawrence, Ma and his 2 sons, Andrew and Nicholas of Lincoln, NH. Sisters Sylvia Lancaster of Barton, Vt. and the late Sally Gill of Peabody, Ma. He also leaves many nieces and nephews and has relatives in the Vermont area. Relatives and friends are invited to attend calling hours on Thursday October 17th from 4-8 PM at the Kenneth H. Pollard Funeral Home 233 Lawrence Street in Methuen. Memorial contributions in George?s honor may be made to the American Lung Association of Massachusetts, Inc. 5 Mountain Road Burlington MA 01803. Online condolences may be made at www.pollardfuneralhome.com. The Pollard Funeral Home is honored to be assisting the Herman family with arrangements.

The family of George A. Herman created this Life Tributes page to make it easy to share your memories.