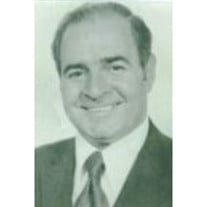 Gabriel J. Goshdigian, 97, of Methuen, passed away peacefully on Monday April 17, 2017 at The Nevins Nursing and Rehabilitation Center of Methuen. Gabriel was born on August 3, 1919 to John and Agnes (Krikorian) Goshdigian in Natick, MA. After graduating with the Class of 1935 from Chelsea High School, he worked as a movie picture projectionist for Showcase Cinemas until his retirement in 1984. Believing in the value of a secondary education, he also attended Northeastern University. In the early 1960?s, Gabriel married the love of his life, Theresa, in a simple ceremony. In addition to working in the cinema, he had a love for all classic movies. Being devoted to the Catholic religion, Gabriel made the pilgrimage to the holy land of Jerusalem seven times. He was also a communicant of Saint Monica?s Parish in Methuen. Gabriel had a love for all things related to football and also of the occasional jaunt to Las Vegas. He touched many lives and will be fondly remembered. Gabriel is survived by his brother Vanagan Goshdigian and his wife Margary of Revere, MA. He was preceded in death by his wife of over 50 years, Theresa in 2015. In addition to his wife and parents, Gabriel was preceded in death by his two sisters Mary Vacubian and Marion Franceshi, and his three brothers; Harry, Charles, and Daniel Goshdigian. Visitation for Gabriel will be held on Monday, April 24, 2017, 9:30 - 10:30 AM at Kenneth H. Pollard Funeral Home, 233 Lawrence Street, Methuen, MA. A Mass of Christian Burial will be celebrated on Monday, April 24, 2017, 11:00 AM at Saint Monica's Parish, 212 Lawrence Street, Methuen, MA. Interment to follow at the Bellevue Cemetery, 170 May Street, Lawrence, MA 01841. In lieu of flowers, please make a contribution in Gabriel?s name to The Home for Little Wanderers, 10 Guest Street, Boston, MA 0213. Online condolences can be given at http://www.pollardfuneralhome.com. The Kenneth H. Pollard Funeral Home is proud to serve the Goshdigian family.

Gabriel J. Goshdigian, 97, of Methuen, passed away peacefully on Monday April 17, 2017 at The Nevins Nursing and Rehabilitation Center of Methuen. Gabriel was born on August 3, 1919 to John and Agnes (Krikorian) Goshdigian in Natick,... View Obituary & Service Information

The family of Gabriel Goshdigian created this Life Tributes page to make it easy to share your memories.