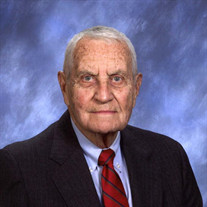 Frederick Nichols Nowell, Jr. (91), known as “Ted,” a longtime resident of Andover, more recently of Edgewood in North Andover, passed away at Lawrence General Hospital on November 24, 2017. Born in Boston, the son of the late Frederick N. Nowell and Barbara S. (Packard) Nowell, he moved to Andover at an early age and was educated there and graduated from Punchard High School in 1943. In his senior year at Punchard he enrolled in the V-12 naval officer program at Tufts University. During World War II he served as executive officer aboard a destroyer escort and various amphibious vessels, primarily in the Philippine Theater. After the war he continued to serve in the Naval Reserve and was recalled to duty during the Korean War to serve in the Japan-Korea area as commander of a division of amphibious ships. He received the American Area Medal, Asiatic-Pacific Area Medal, Philippine Liberation Medal, World War II Victory Medal, Naval Reserve Medal, National Defense Service Medal, Korean Service Medal, and United Nations Service Medal. After World War II he completed his education at Tufts in 1948, graduating with the Class of 1947. Mr. Nowell was an insurance broker and consultant for 45 years, retiring in 1991 as a general partner of Brewer & Lord in Boston. Prior to that he was the owner of Herbert Fields & Co. insurance. He held the Chartered Property Casualty Underwriter (CPCU) designation and was active in insurance professional organizations. For fifteen years he was a team manager in the Andover Little League and served twice as president. In more recent years he was a deacon and trustee of South Church in Andover. He was a member of St. Matthew’s Lodge of Masons. He was pre-deceased by Mildred Ann (Videto) Nowell, his wife of 61 years. He leaves sons Frederick N. Nowell, III and his wife Leslie J. of Andover and Todd J. Nowell and his wife Marianne of Londonderry, N.H. and a daughter, Robyn L. Poirier and her husband George R. of Bradford, Mass. He is survived by seven grandchildren and their families: Kirstin L. Nusky and Ashley P. Andrade of Andover, Frederick N. Nowell, IV of Tewksbury, Keith D’Amelio of Wilsonville, Ore., Matthew C. Nowell of Londonderry, N.H., Drew E. Poirier of Bend, Ore., and Ethan R. Poirier of Bradford. He also leaves a sister, Diane L. Watson of Newburyport and brothers Alan P. Nowell of Miami, Fla. and Peter R. Nowell of Amesbury, six great-grandchildren, and numerous nieces and nephews. He was predeceased by two sisters, Audrey H. Tarpy and Judith N. Camasso, and a brother, David B. Nowell. Friends and guests are invited to call on Sunday, December 3, 2017 from 1:00 PM until 4:00 PM at the Kenneth H. Pollard Funeral Home, 233 Lawrence St. Methuen. A funeral service will be held on Monday, December 4, 2017 at 10:00 AM at South Church, 41 Central St. Andover. Interment to follow at Spring Grove Cemetery in Andover. Memorial contributions may be made to South Church. For directions and online guestbook, please visit the funeral home website, www.pollardfuneralhome.com. The Kenneth H. Pollard Funeral Home is honored to serve the Nowell Family.

Frederick Nichols Nowell, Jr. (91), known as &#8220;Ted,&#8221; a longtime resident of Andover, more recently of Edgewood in North Andover, passed away at Lawrence General Hospital on November 24, 2017. Born in Boston, the son of the late Frederick... View Obituary & Service Information

The family of Frederick N. Nowell Jr. created this Life Tributes page to make it easy to share your memories.