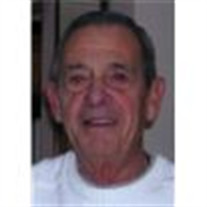 Frank V. Grande, 78, of Haverhill, died peacefully Tuesday, February 4, 2013 after a short illness. His beloved wife and longtime sweetheart, Emily R. (McAlea) Grande, died in 1992. Frank, son of the late Adeline ?Tillie? (Stabile) Grande, was born in Methuen on August 12, 1934. During his 30 plus years of employment with Avco Textron Systems, Frank served in various capacities such as Director of Manufacturing and Engineering. He retired in 1992. Frank was a veteran of the Korean War, serving in the United States Air Force. Frank was an enthusiastic sports fan. Although he had a try out with the New York Yankees, he followed all of the local teams. He loved traveling often to the beach, Bermuda and Aruba. His favorite trip of all was in the morning to Heavenly Donuts for coffee and his jelly donut. He will be deeply missed by his sister, Dorothy M. DiPietro and her husband Enio ?Pete? of North Andover; three nieces, Robyn Rufo and her husband Renato of Rhode Island, Lisa Webb, her husband Ron and their son Parker of New Hampshire and Maryanne McAlea and her children of California; one nephew, Kevin McAlea and his wife and child of London England, as well as Frank?s godson Scott Picanso and Scott?s mother Jean, both of New Hampshire and his in-laws. Patricia McAlea and Geraldine and Raymond McAlea with whom he was very close. Family and friends will honor and celebrate Frank?s life by gathering for calling hours in the KENNETH H. POLLARD FUNERAL HOME, 233 Lawrence St., Methuen on Monday, February 11, 2013 from 4-7 PM. His Funeral Mass will be celebrated at St. Monica?s Church, 212 Lawrence St., Methuen on Tuesday, February 12 at 11 AM. Burial will follow in Walnut Grove Cemetery, Methuen. To share a condolence with the family, please visit us online at www.pollardfuneralhome.com. Arrangements have been entrusted to the care of Kenneth H. Pollard Funeral Home, Methuen.

The family of Frank V. Grande created this Life Tributes page to make it easy to share your memories.