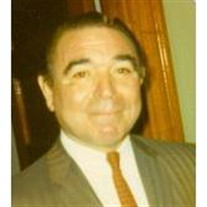 Haverhill, MA. ? Frank Piazza, 96, died after a short illness at Penacook Place Nursing Home. Born in Sicily, Italy 1912, Frank moved to the United States with his mother Josephine at the age of 5. His father Nicola joined his wife and son several months later settling in Lawrence, MA. Frank?s family quickly grew totaling 7 siblings and during the depression worked along side his father delivering ice to the residents of Lawrence. Frank also boxed professionally to help support his family during these difficult times. At the onset of World War II, Frank enlisted in the U.S. Marine Corp. He rose to the rank of sergeant quickly and became leader in the 4th Division. Frank fought in the battle of Iwo Jima. Frank was a decorated Marine Veteran and received a Purple Heart for injuries sustained during battle. Frank was an extremely proud Marine and equally proud to serve his country in battle. A member of the DAV Queen City Chapter #2, he belonged to the Haverhill VFW (veterans of foreign wars). Mr. Pizza was a communicant of All Saints Church in Haverhill. Frank met and married the late Jenny (Ruocco) Piazza and settled in Haverhill where they lived until her death in 1998. Frank is survived by his brothers Adam and wife Mary Piazza of Haverhill, Gus and wife Mary of Ocala, FL. And sister Eve of Albany, NY. Frank was predeceased by a brother Sam Piazza and a sister Rita Croteau, Josephine Spatola and Mary Piazza of Haverhill. Although Frank did not have children of his own, he loved and brought joy to his many nieces and nephews; Raymond Croteau of Hampton, NH, Glen Spatola of Seattle, Washington, his Godson Andrew Piazza of Lowell, William Piazza of Methuen, Brian Spatola of Melbourne, FL., David Ashline of Albany, NY, Cindy Ashline of Albany, NY, Linda Audi also of Albany, Donna Therrian of Andover Frank is also survived by many grand and greatgrand nieces and nephews Gary Piazza, Alen Piazza, & niece Debbie (Croteau) Lawson. A Mass of Christian burial will take place on Tuesday morning at 10 o?clock in All Saints Church of Haverhill with burial to follow in Elmwood Cemetery in Methuen. Friends may pay their respects on Monday from 4-8 P.M. at the Kenneth H. Pollard Funeral Home 233 Lawrence Street in Methuen.

Haverhill, MA. ? Frank Piazza, 96, died after a short illness at Penacook Place Nursing Home. Born in Sicily, Italy 1912, Frank moved to the United States with his mother Josephine at the age of 5. His father Nicola joined his wife and son... View Obituary & Service Information

The family of Frank Piazza created this Life Tributes page to make it easy to share your memories.