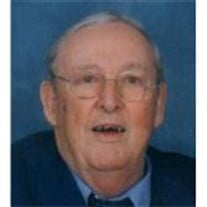 Methuen ? Frank H. Messer, Jr., 81, of Methuen, died Tuesday, January 16, 2007 at Holy Family Hospital, surrounded by his loving family. He was the husband of Pauline (Charest) Messer, to whom he was married for 59 years. Frank was born in Methuen, July 27, 1925, son of the late Frank H. and Jessie Messer. He was educated in Lawrence schools, graduating from Lawrence High in 1943. Frank served in the United States Navy during World War II. He went on to earn his Associate and Bachelor degrees from Northeastern University and his Masters of Education from Salem State College. Frank became a teacher in the Lawrence school system in 1957. Over the years, he served in a number of roles, including teacher at the Tarbox and Oliver Schools, Principal of the Magnet School and Vice Principal of the Bruce and Oliver Schools. During his tenure, he founded the Lawrence Schools? eighth grade science fair and received a citation from the Lawrence Rotary Club for service to the youth of Lawrence in a tutorial program. He retired in 1990 as the Vice Principal of the Bruce School. Frank felt richly rewarded by his life, including his loving family and warm friendships. He enjoyed traveling around the world, visiting many new countries with his wife and friends and sharing photos of their travels. Frank also enjoyed reading, following Boston sports, stamp collecting, and doing crossword puzzles. Most of all, he enjoyed spending time with his family, and looked forward to ?Sunday visits? with his children and grandchildren. Frank was an active member of Grace Church in Lawrence, and previously served as Senior Warden. He was also a former President of the Lawrence Teachers? Union 1019 and former President of the Lawrence Little League, Member of the Lawrence Elks. In addition to his wife, Frank is survived by his nine children, Frank III and his wife Diane of East Hampstead, N.H., Brian and his wife Jeanette of Brownsmills, N.J., Richard and his wife Hyeyong of Lawrence, Jeffrey and his wife Lynne of Methuen, Charlotte Parks and her husband Bruce of Auburn, N.H., Joyce Fusco and Neal Tetrault of San Diego, C.A., Karen Ord, wife of the late Kevin Ord of Methuen, Lynn Curtin and her husband Daniel of Pelham, N.H., and Christine Muise and her husband Robert of Superior, M.I; 27 grandchildren; 19 great-grandchildren. He is also survived by many other family members and dear friends. Friends may call on Friday from 2-4 P.M. & 6-8 P.M. at the Kenneth H. Pollard Funeral Home, Inc. 233 Lawrence Street in Methuen. Funeral services will take place on Saturday morning at 10 o?clock in Grace Episcopal Church in Lawrence with burial to follow in Elmwood Cemetery Methuen. Memorial contributions may be made to Grace Episcopal Church Restoration Fund 35 Jackson Street Lawrence, MA 01840.

Methuen ? Frank H. Messer, Jr., 81, of Methuen, died Tuesday, January 16, 2007 at Holy Family Hospital, surrounded by his loving family. He was the husband of Pauline (Charest) Messer, to whom he was married for 59 years. Frank was born in... View Obituary & Service Information

The family of Frank H. Messer created this Life Tributes page to make it easy to share your memories.