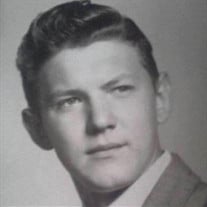 Salem, N.H. - Francis Richard Koza of Salem, NH passed away on Friday morning January 10th at his home surrounded by family and friends. He was the son of Jan and Rosalia (Byra) Koza. Born in Andover in 1930 and raised in Lawrence, Frank graduated from Lawrence High School. He served in the naval reserves then US Army from 1950-1952. He moved his family to Salem, NH in 1959 and was a resident there for the remainder of his life. Frank was an Engineer for GTE Sylvania and Textron prior to his retirement. He was a man of many talents and interests who enjoyed cooking, gardening, golfing, traveling and spending time with his family. Being a kind, intelligent and caring man he was always sought out by family and friends for advice and guidance on everything from car repairs and gardening to coping with challenging life situations. He was loved and respected by all who knew him and was a rock of emotional strength for his family. Frank is predeceased by his wife Barbara J. Koza (Flanagan), the love of his life. They were married for 59 wonderful years before her death in 2010. He is survived by his daughter Patricia Dowgiert of Salem, NH and spouse Joseph Dowgiert; daughter Karen Dowgiert and John Zak of Londonderry, NH; daughter Cynthia Zulauf and spouse Lawrence Zulauf of Salem, NH and son Francis R. Koza Jr. of Derry, NH and spouse Shelly Koza. He is also survived by a large and loving extended family of 9 grandchildren and 7 great grandchildren. His large and devoted circle of family and friends is a testament to the wonderful life he led. He will be dearly missed by all. Visitation for Frank will be held on Tuesday, January 14, 2020 4 - 8 PM at the Kenneth H. Pollard Funeral Home, 233 Lawrence Street, Methuen. Friends and family are cordially invited to attend. A Mass of Christian Burial will be cerebrated on Wednesday, January 15, 2020 11 AM at St. Matthews Catholic Church, 2 Searles Road, Windham, NH. Interment to follow at Pine Grove Cemetery, Salem, NH. The Kenneth H. Pollard Funeral Home is proud to serve the Koza family.

Salem, N.H. - Francis Richard Koza of Salem, NH passed away on Friday morning January 10th at his home surrounded by family and friends. He was the son of Jan and Rosalia (Byra) Koza. Born in Andover in 1930 and raised in Lawrence, Frank graduated... View Obituary & Service Information

The family of Francis Richard Koza created this Life Tributes page to make it easy to share your memories.