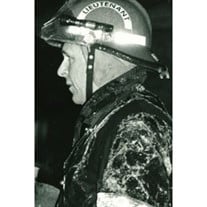 Francis ?Frank? Joseph Wolfendale, 76, of Methuen, passed away on April 10, 2017 in the comfort of his own home surrounded by his devoted family. Francis was born and raised in Lawrence, MA to Frank and Stella (Krzystyniak) Wolfendale. After graduating with the Class of 1958 from Lawrence High School, he felt the patriotic call of duty and enlisted in the United States Navy in which he proudly served until 1960. After being discharged from the service, Francis and his wife settled in Lawrence to raise their family. Knowing the full value of a postsecondary education he graduated from Northshore Community College with a degree in Fire Science. Francis continued to serve, this time not his country, but his local community as a fire fighter with the Lawrence Fire Department, in a career that spanned three decades until his retirement in 1999 with a rank of Lieutenant. Francis received many commendations for his service and volunteer work throughout the years. As a man who believed and championed many causes that were greater than his own, he selflessly volunteered his time and services to many organizations. Francis was the smiling face that many grew to know and love through his deliveries with Meals on Wheels, his helping hand with the Lazarus House, the Lawrence Reliefs Inn and serving meals with Cor Unum at St. Patrick?s. He was awarded many times with high accolades for his tireless and selfless devotion to service. Francis was a member of Lawrence Elks lodge 65 and the IAFF Local 146 Lawrence Fire Department, additionally he also served on the Board of Directors with the Lawrence Firefighters Credit Union. As a devoted father and family man, he will fondly be remembered for spending much quality time with his children and grandchildren on the serene shores of Little Island Pond. Francis was a man who had a fondness for the great outdoors, he was a member of the 4000 Footers Club of the White Mountains, climbing all 48 peaks over 4,000 in New Hampshire. . Francis spent countless hours as a guide, teacher, and mentor to the many youths that had the privilege of serving under his tutelage of Boy Scout Troop at St. Joseph?s Church, Lawrence. He remained an active member of Boy Scout Troop #2 of Lawrence Alumni for decades, going on their annual mountain camping trip each August. Francis was a person who wore many different hats throughout his life, but he was a man that touched many people?s lives and will fondly be remembered by all. Francis is survived by his four devoted children; his daughter Janice Wolfendale of Lawrence; his son William Wolfendale and wife Nina of Andover; his son Mark Wolfendale of Methuen, and his daughter Taisha Wolfendale of Lowell. He was the loving grandfather to his five grandchildren; William Jr, Rose, Mark Jr, Katherine, and Anna. Francis is also the proud great-grandfather to Adrian. He was the cherished brother to Thomas, Bruce, and Brian Wolfendale. Francis is also survived by many loving cousins, nieces, and nephews; additionally, he is survived by his longtime companion, Jo-Ann Huddleston. He adored her two grandchildren Braden and Bailey. In addition to his parents, he was preceded in death by his wife Joann (Jarosz) and their daughter, Kathy Jean, along with his three brothers; Robert, Kevin, and Edward Wolfendale. Visitation for Francis will be held Tuesday, April 18, 2017, from 3:00 - 8:00 PM at Kenneth H. Pollard Funeral Home, 233 Lawrence St, Methuen, MA. Friends and family are cordially invited to attend. A Mass of Christian Burial will be celebrated on Wednesday, April 19, 2017, 11:00 AM St. Lucy?s Parish, 254 Merrimack St, Methuen, MA. Interment to follow at Elmwood Cemetery, 130 N Lowell St, Methuen, MA. In lieu of flowers, please make a memorial contribution in Francis?s name to a charity of your own choosing. Online condolences can be given at http://www.pollardfuneralhome.com. The Kenneth H. Pollard Funeral Home is proud to serve the Wolfendale family.

Francis ?Frank? Joseph Wolfendale, 76, of Methuen, passed away on April 10, 2017 in the comfort of his own home surrounded by his devoted family. Francis was born and raised in Lawrence, MA to Frank and Stella (Krzystyniak) Wolfendale. After... View Obituary & Service Information

The family of Francis J. Wolfendale created this Life Tributes page to make it easy to share your memories.