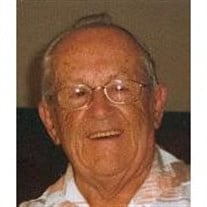 Hooksett, NH ? Fernand E. ?Fred? Desrosiers passed away Thursday September 22, 2011 at the V.A. Medical Center in Manchester, NH surrounded by his loving family. He was born in Lawrence, Ma. December 12, 1923 the son of Arthur and Clara (Genest) Desrosiers. Fred had been a longtime resident of Methuen. During his working career he had worked at the Service Wood Heel of Lawrence, and most recently as a custodian with the former First Essex Savings Bank in Lawrence where he retired. He was a former attendant of Our Lady of Mount Carmel Church in Methuen before its closing and a member of their Holy Name Society where he served as an usher for many years. He belonged to the Lawrence B.P.O.E. Lodge of Elks # 65, and the Queen City Chapter of Disabled American Veterans, and the Arnold Greenwood Post # 8349 VFW (Veterans of Foreign Wars) and a past commander from 1987-1988 and charter member as welll. During World War II he served his country in the United States Army before his honorable discharge at war?s end. In September of 2009 he was proud to be among world war II veterans who traveled to Washington, D.C. to the World War II Memorial under the auspices of Honor Flight New England. He enjoyed ballroom dancing, square dancing, and woodworking. Fred enjoyed winter vacationing in Florida for 27 years and loved taking cruises, bowling, card playing, and a good round of horse shoes. He is survived by his wife of 59 years; Jeannette (Houle) Desrosiers, and children Janine and husband Robert Caro of Michigan, Susan and husband Kevin Nimmo of Atkinson, NH, Paul and wife Jo-Anne Desrosiers of Salem, NH, Linda Proctor of Derry, NH, and Lisa and her husband Daniel Audy of Pelham, NH, 11 grandchildren, 6 greatgrandchildren and several nieces and nephews.Fred was pre-deceased by a grandson Eric Nimmo, and a brother Roland Desrosiers. A Mass of Christian burial will take place on Monday morning at 11 A.M. in Saint Monica?s Church in Methuen with burial to follow in Saint Mary?s Cemetery of Lawrence. Friends will be warmly received on Sunday from 4-8 p.m. at the Kenneth H. Pollard Funeral Home, Inc. 233 Lawrence Street in Methuen. In lieu of flowers memorial contributions may be made to VA Medical Center Palliative Care Unit 718 Smyth Road Manchester, NH, 03104 or Honor Flight New England P.O. Box 16287 Hooksett, NH 03106.

The family of Fernand E. "Fred" Desrosiers created this Life Tributes page to make it easy to share your memories.