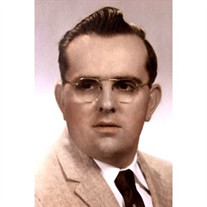 Pelham, NH ? Felix E. Quintal, 85 of Pelham, NH, passed away on Thursday, March 23, 2017 at Hannah Duston Healthcare Center in Haverhill. He was the cherished husband of the late Josette (Zimmerli) Quintal.� Born in Lawrence, MA on April 18, 1931, Felix was the son of Narcisse and Bertha (Bolduc) Quintal. As a proud retired US Navy and Korean War veteran, he served his a country for nearly four decades. While on active duty Felix met his bride while ported in France. He was known as a humble man who was deeply devoted to his family and was an exceptional provider. Felix worked, sometimes up to three jobs at a time, as a machinist for Raytheon until his retirement. In his free time, he enjoyed the quiet activities of stamp collecting and doing crossword puzzles. Felix touched many lives and will be greatly missed. Felix was the devoted father to his four children; his daughter, Edwige Sahraoui of Green Valley, AZ, his son Philippe Quintal of Rochester, NH, and his daughter, Anick Arsenault and her husband, Michael of Atkinson, NH. He is survived by his 7 grandchildren, 7 great grandchildren, and 1 great-great granddaughter. Felix is also survived by his two sisters, Sr. Rita Quintal of Connecticut and Theresa Avard of Bedford, NH. In addition to his parents and his wife, Felix is predeceased by his son, Charles Quintal, his 8 brothers, and 4 sisters. Visitation for Felix will be held on Friday, March 31, 2017 from 9-11 AM at the Kenneth H. Pollard Funeral Home, 233 Lawrence St, Methuen, MA. A funeral service will be held immediately following calling hours at the funeral home. Friends and family are cordially invited to attend. Interment to follow at St Mary-Immaculate Conception Cemetery, 29 Barker St, Lawrence, MA. In lieu of flowers, memorial contributions can be made in Felix?s name to the American Cancer Society, Memorial Giving Program, 30 Speen Street, Framingham, MA 01701 or to the Wounded Warrior Project, National Processing Center, PO Box 758516, Topeka, KS 66675-8516. To send an online condolence, please visit www.pollardfuneralhome.com. The Kenneth H. Pollard Funeral Home, 233 Lawrence Street, Methuen is honored to serve the Quintal family.

Pelham, NH ? Felix E. Quintal, 85 of Pelham, NH, passed away on Thursday, March 23, 2017 at Hannah Duston Healthcare Center in Haverhill. He was the cherished husband of the late Josette (Zimmerli) Quintal.&#65533; Born in Lawrence, MA on... View Obituary & Service Information

The family of Felix Quintal created this Life Tributes page to make it easy to share your memories.