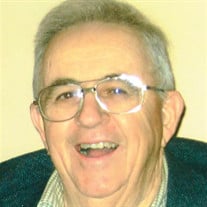 Eugene “Gene” D. Veilleux, 86 of Methuen, passed away on Saturday, March 9, 2019 at Methuen Village Assisted Living. He was the beloved husband of the late Carol G. (Lacasse), to whom he was married for 52 years. Born in Lawrence on September 24, 1932, Gene was the son of Joseph Eugene and Emma (Dube) Veilleux. He graduated from Central Catholic High School in 1951 where he played varsity basketball and was awarded the McGuiness Trophy for the top Scholar-Athlete in the Catholic Conference. He went on to attain his bachelor’s degree in mechanical engineering from the University of Massachusetts in 1955. He proudly served his country as an engineering officer in the United States Air Force and then received his master’s degree in mechanical engineering from Northeastern University. Gene was a mechanical engineer and heat transfer specialist on several missile defense programs as well as the Apollo Space Program including the first manned flight to the moon, as a private defense consultant for RCA, Sanders, and Teradyne before his retirement. In his free time, he enjoyed gardening, walks on the beach, and his many home improvement projects. He was also an avid Central Catholic High School basketball fan. Gene will be deeply missed by his 8 children, Joseph E. Veilleux and his wife, Janice of Cary, NC, Joan M. Veilleux of Colorado, Robert L. Veilleux and his wife, Kelly of Brookline, NH, Otis Veilleux and his wife, Marybeth of Salem, NH, James P. Veilleux of Rockville, MD, Mary J. Crump and her husband, Jeffrey of Wakefield, Steven C. Veilleux and his wife, Jennifer of Montara, CA, and Julie A. Novak and her husband, Mark of Framingham; 21 grandchildren; and his sister-in-law, Sr. Joan Lacasse SND, of Worcester. Family and friends will honor and celebrate Gene’s life by gathering for his calling hours on Wednesday, March 13, 2019 from 4:00- 8:00 PM at the Kenneth H. Pollard Funeral Home, 233 Lawrence Street, Methuen. His Mass of Christian Burial will take place at 11 AM on Thursday at St. Robert Bellarmine Church, 198 Haggetts Pond Road in Andover. Burial will follow at Elmwood Cemetery in Methuen. To send a condolence to Gene’s family, please visit www.pollardfuneralhome.com. In lieu of flowers, memorial contributions can be made to the Alzheimer’s Association, 480 Pleasant Street, Watertown, MA 02472. Gene’s family would like to extend their deepest gratitude to the loving caregivers and staff at Methuen Village Compass Memory Support and Compassionate Care Hospice for the exceptional care and compassion they provided during Gene’s time there. The Kenneth H. Pollard Funeral Home is honored to serve the Veilleux family.

Eugene &#8220;Gene&#8221; D. Veilleux, 86 of Methuen, passed away on Saturday, March 9, 2019 at Methuen Village Assisted Living. He was the beloved husband of the late Carol G. (Lacasse), to whom he was married for 52 years. Born in Lawrence... View Obituary & Service Information

The family of Eugene D. Veilleux created this Life Tributes page to make it easy to share your memories.