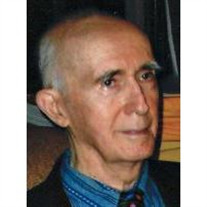 Ernest Goodwin Mack, the official historian of the City of Methuen, passed away peacefully at his home on Saturday, October 27th, after a very lengthy battle with Parkinson?s disease. He was very proud of his home, which his great grandfather had built in 1867, and in which house he had been born on October 26, 1925. Ernest was the son of the late Mildred (Kelley) and Ernest G. Mack of Methuen. His father having passed away before his birth, Ernest was raised by his mother, aunts and grandparents. He was proud of his ?Yankee? heritage, being descended from the first settlers of Newbury in 1635 and of the famous Hannah Duston of Haverhill. Ernest was a member of the Searles High School class of 1941 and went on to graduate from the Bentley School of Accounting. He worked briefly for the old Western Electric in its downtown Haverhill location, but found researching land titles and historical data much more rewarding. Ernest was especially proud to tell of one case in which two lawyers had asked him to solve a land title issue which neither of them could resolve. He was also a self employed groundskeeper in which capacity he hired teenaged helpers, some of whom are still among his nearest and dearest friends. Ernest, along with his mother and aunt, had been a member of Methuen?s Historical Committee, the forerunner of the Methuen Historical Commission. Ernest served as chairman of the historical commission for several decades, being named the ?Official Historian for the City of Methuen? and Chairman Emeritus of the Methuen Historical Commission in the late 1990?s. He took on the sole responsibility of maintaining, preserving and displaying Methuen?s historical collections for decades, first in a room on the second floor of the Searles building and later in the house next to the Nevins Library until the library expansion when the house was demolished and the collection was put into storage in the basement of the Masonic Temple. For Methuen?s 250th Anniversary in 1976, Ernest wrote ?Bridges From The Past?, an overview of Methuen?s history geared towards schoolchildren for whom he had taught ?mini-courses? on town history and conducted historical tours of Methuen. In 2004, the 1876 ?Howe History? of Methuen and Ernest?s ?Bridges from the Past? were reprinted as one volume by the Merrimack Valley Preservation Organization. Also in 2004, Ernest was selected as the ?Person of the Year? by both the Methuen Board of Trade and the Methuen Historical Society. Ernest was also a member and past president of the Salem, NH Historical Society, where he spent many Monday afternoons working in the Salem Museum, which had been built as the North Parish Meetinghouse of Methuen before Salem was separated from Methuen. Ernest was a charter member of the Amherst NH Historical Society, in which town he had inherited and maintained the Upham Farm through his mother?s family. He was also a member and past president of the Upham Family Society which maintains the historic ?Upham House? in Melrose, MA. Ernest is survived by numerous friends and cousins. He had been a wonderful friend and mentor to many young people in the greater Methuen area. He will be fondly remembered and greatly missed. Family and friends will be warmly received in the Kenneth H. Pollard Funeral Home, 233 Lawrence St., Methuen on Friday, November 2, 2012 from 4-8 PM. His funeral service will be held in the funeral home on Saturday, November 3, 2012 at 10 AM followed by interment in Pine Grove Cemetery, Salem, New Hampshire. Rev. Dr. Richard E. Haley, Pastor of First-Calvary Baptist Church in North Andover will officiate. In lieu of flowers, contributions in his memory may be made to the Methuen Historical Society Legacy Program, 41 Pleasant St., Methuen, MA 01844 or the Kelley Library, 234 Main St., Salem, NH 03079. To share a condolence with the family, please visit us online at www.pollardfuneralhome or visit Kenneth H. Pollard Funeral Home on Facebook. Arrangements have been entrusted to Kenneth H. Pollard Funeral Home, Methuen.

Ernest Goodwin Mack, the official historian of the City of Methuen, passed away peacefully at his home on Saturday, October 27th, after a very lengthy battle with Parkinson?s disease. He was very proud of his home, which his great grandfather... View Obituary & Service Information

The family of Ernest G. Mack created this Life Tributes page to make it easy to share your memories.

Ernest Goodwin Mack, the official historian of the City of Methuen,...