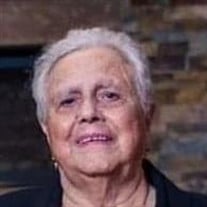 Ermelinda Ferreira Miranda, 85, longtime resident of Lawrence, passed away at home on March 3, 2019 surrounded by her devoted family. Born on August 30, 1933 to the late Francisco Goncalves Miranda and Maria Da Conceicao Ferreira in Terceira, Azores, Portugal, she immigrated to the United States at the age of 55 and settled in Lawrence with her daughter and family. Ermelinda worked for many years at the Cardinal Shoe Company until her retirement. A devout lifelong Catholic, she enjoyed crocheting, needle point, being a homemaker, watching novela’s and going out for walks. Ermelinda touched many lives in many different circles and she will fondly be remembered, cherished, and missed by all. Ermelinda is survived by her cherished daughter, Ermelinda L. Morais and her husband Alberto of Lawrence. She was the proud grandmother to her three granddaughters; Lisa Morais and her husband Francisco of Derry, NH, Sandra Legner and her husband Matthew of Chester, NH, and Vanessa Morais of Fitchburg, MA. Ermelinda was the great-grandmother to Autumn and Hazel Legner. She is also survived by her step-daughter, Maria Sampaio and her husband Francisco of Warren, RI and her step-daughter-in-law, Grimaneza Leal of Terceira, Azores. Ermelinda is also survived by her stepchildren’s children; Donna Welshman, her husband Donald and their son Donald all of Rehoboth, MA, and Marilia Castro, her husband Francisco and their children Joao Pedro and Rute all of Terceira, Azores. She was the dear sister to her brother, Pedro Miranda of Toronto, CA and her sister Alzira Miranda of Pico, Azores. Ermelinda is also survived by many nieces and nephews. In addition to her parents, Ermelinda was preceded in death by her beloved husband, Joao Ferreira Leal in 1985, her stepson, Joao Martins, and four of her siblings. Visitation for Ermelinda will be held on Wednesday, March 6, 2019 from 4 – 8 PM at the Kenneth H. Pollard Funeral Home, 233 Lawrence Street, Methuen. Friends and family are cordially invited to attend. A funeral service will be held on Thursday, March 7, 2019 at 10 AM at the funeral home. Interment to follow at St. Mary’s Immaculate Conception Cemetery, 29 Barker Street, Lawrence. The Kenneth H. Pollard Funeral Home is proud to serve the Miranda family.

The family of Ermelinda F. Miranda created this Life Tributes page to make it easy to share your memories.