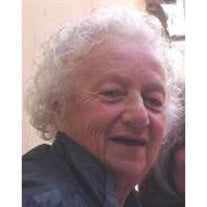 Salem, N.H. ? Emily A. (Latini) Antone, 82, of Salisbury, died peacefully Friday, January 25, 2013 at Salemhaven Nursing & Rehabilitation Center in Salem, N.H. Born on July 7, 1930, in Lawrence, she was the daughter of the late Vincenzo and Virginia (Cialone) Latini. Emily was educated in the Lawrence school system and graduated from Lawrence High School. Emily played two roles in her life; the first was a loyal supporting role where she was the drive, the support, and tenacity behind building a successful career in management for her husband while making a home for her three children and supporting their every endeavor. At a time when most people are looking to retirement, she was put into a position to start all over again. She got a job and with her leadership skills was elected Union Steward of local 1505 of the IBEW. She was appointed by the Governors Council of Massachusetts a "Notary Public" and a "Justice of the Peace" which she used to solemnize many marriages for the public as well as friends and family. She was sworn in as a "Deputy Sheriff" of Essex County. In her lead role she chose to focus on continuing to be an "All Pro" mother, and becoming an "MVP" grandmother to her "Pumpkins" Emily, Evan, Justin, Lyssa, Marc and Joel. It is said, one measure of a person?s life is the hole they leave when they are gone. This one is big. We are grateful to her many friends and Salisbury Beach neighbors for watching over her. She was a bright, guiding light, and I see that twinkle in her "Pumpkins" that light will get brighter. The angels are eating well tonight. Emily will be deeply missed by her sons, Thomas and Philip; and daughter, Virginia and their families; her niece, ?Ginny?; nephews, Bobby, and Albert and their extended family; her friend and sister-in-law, Lorraine; and special niece, Ann Marie Martinese, who brought us back together. ARRANGEMENTS: Family and friends will honor and celebrate Emily?s life by gathering for a funeral service at the Kenneth H. Pollard Funeral Home, 233 Lawrence Street in Methuen on Saturday, February 2 at 11 a.m. Calling hours will take place on Saturday, from 9-11 a.m. at the funeral home. Inurnment will follow at the Immaculate Conception Cemetery in Lawrence. For directions or to share a condolence with the Antone family, go to www.pollardfuneralhome.com or visit Kenneth H. Pollard Funeral Home on Facebook. The Kenneth H. Pollard Funeral Home is honored to serve the Antone family

Salem, N.H. ? Emily A. (Latini) Antone, 82, of Salisbury, died peacefully Friday, January 25, 2013 at Salemhaven Nursing & Rehabilitation Center in Salem, N.H. Born on July 7, 1930, in Lawrence, she was the daughter of the late Vincenzo and... View Obituary & Service Information

The family of Emily A. Antone created this Life Tributes page to make it easy to share your memories.