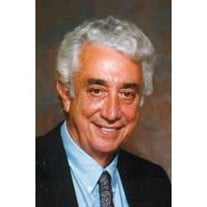 Hampton, NH ? Emelio "Mel" Troisi, 87, of Hampton, NH, passed away on Thursday, September 5, 2013 at Oceanside Skilled Nursing and Rehabilitation Center in Hampton, NH surrounded by his loving family. He was the beloved husband of the late Mary (Hatem) Troisi. Born in Lawrence on February 11, 1926, he was the son of the late Giacomo and Teresa (Martroluca) Troisi. Mel was educated in the Lawrence school system and graduated from Lawrence High School. He served in the U.S. Navy during World War II. He was the owner and operator of Saundra Jeannine Florist in Lawrence until his retirement. Mel was a former communicant of Holy Rosary Church in Lawrence. He was a member of the Sons of Italy, Lodge 902, of Methuen, the Italian American Club, and the Lawrence Chamber of Commerce. He was also a long-time member of the 100 Club at Abenaqui Country Club of Rye Beach, NH. Mel will be deeply missed by his 2 daughters, Saundra Stewart and her husband, Edward of Seabrook Beach, NH, Maria Gallagher and her husband, David of Hampton Falls, NH; 3 grandchildren, Edward Stewart, Jr. and his wife, Erin, of North Andover, MA and John Gallagher and Jennifer Gallagher both of Hampton Falls, NH; 2 great grandchildren, Lauren and Allison Stewart; and several nieces and nephews. He is predeceased by 2 brothers, Pari and Francis Troisi and 2 sisters, Christina Fiacchino and Rose Nitto. Family and friends will honor and celebrate Mel's life by gathering for calling hours at the Kenneth H. Pollard Funeral Home, 233 Lawrence Street, Methuen on Sunday, September 8, 2013 from 2-6 PM. A Mass of Christian burial will take place on Monday, September 9th at 10 AM at Corpus Christi/Holy Rosary Church, 35 Essex Street, Lawrence. Burial will follow in St. Anthony's Cemetery in Methuen. The family has requested, in Mel's honor, memorial contributions be made to the American Heart Association, New England Affiliate, Inc., 20 Speen Street, Framingham, MA 01710. For directions or to send an online condolence to Mel's family, please visit www.pollardfuneralhome.com. The Kenneth H. Pollard Funeral is honored to serve the Troisi family.

Hampton, NH ? Emelio "Mel" Troisi, 87, of Hampton, NH, passed away on Thursday, September 5, 2013 at Oceanside Skilled Nursing and Rehabilitation Center in Hampton, NH surrounded by his loving family. He was the beloved husband of the late Mary... View Obituary & Service Information

The family of Emelio "Mel" Troisi created this Life Tributes page to make it easy to share your memories.