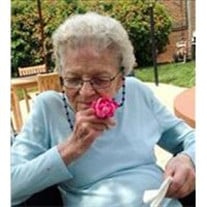 Elizabeth Morse Flanders Cleveland was born on May 9, 1916, and died peacefully on November 14, 2015. She was the daughter of William Niles Flanders and Helen Hoyt Macartney Flanders. Her younger brother, Robert Flanders died in 1942 during World War II, while training to be a pilot for the US Army. Elizabeth ("Betty") grew up in Niagara Falls, NY and Lawrence, MA. She attended Abbot Academy in Andover and Wellesley College, majoring in art. At college, Betty was a champion skier. She was the winner, two times in succession, of the Intercollegiate Ski Championship, and was being considered for the Olympic ski team. Betty graduated from Wellesley College in 1938. At this time, she gave up thoughts of competitive skiing, married Harold van Buren Cleveland ("Van"), and traveled with him to Europe on his Fulbright scholarship. They returned to live in Washington, D.C. where Van entered the service in army intelligence. After the war, he was employed as a government lawyer and economist. Betty and Van had four children, Helen Hoyt, Marian, Mark, and Holly. Betty spent much of her free time painting and taking art courses. She was an accomplished portrait painter. She studied at the Corcoran Museum in Washington, D.C, at the Art Students League of New York with John Sanden, and at the Rockport Art Association in Rockport, Massachusetts, with Jack Callahan. In 1957, the family moved to Wellesley, MA. There, Betty continued with her painting, joining the Wellesley Society of Artists. She became an accomplished photographer and was a member of the Boston Camera Club. Betty was also an avid gardener, who grew champion roses. She successfully competed with her roses in many rose shows. Betty's house was always loving and lively and could be counted on to be full of children, cats, dogs and other assorted pets. One year, Betty successfully raised and released a baby Baltimore Oriole. She wrote a book about that little bird, complete with drawings and photographs, titled, "Have you Met Charlio, or Yes, You CAN Raise a Baby Bird!" Betty stated that her oriole returned to her yard each spring for fifteen years. Betty moved to Briarwood Health Center in Needham, in 2012, where she was lovingly cared for for the past three years. Betty Cleveland leaves her daughter Helen Hoyt Schmidt, and her son-in-law Steffen Schmidt of Nevada, Iowa; her daughter Marian Cleveland Harman and son-in-law William H. Harman, of Westford, Massachusetts; her son Mark van Buren Cleveland and daughter-in-law Lilly Cleveland of Norwell, Massachusetts, and her daughter Holly Hildreth and son-in-law Peter Hildreth of Olathe, Kansas. She also leaves her grandchildren, Paul Schmidt, Kelly Schmidt, Aaron Harman and Lydia Harman, Lauren and Mark Hoffmann, Matthew Cleveland, William and Grace Cleveland, Ana and Rama Inacio, and Margaret Lezcano, and eight great grandchildren, Sergey, Angela, Victoriya, Henry and Benjamin Harman, Sophia and Eden Inacio, and Charlie Hoffmann. Donations in Betty's name may be sent to Save the Children, at 501 Kings Highway, Suite 400, Fairfield, CT., 06825, or to World Wildlife Fund at 1250 24th St., NW, Washington, DC, 20037. Please make the notation: "In memory of Elizabeth Cleveland" on the check. A funeral service will be held on Friday, November 20, 2015 at 11:00 AM at the Kenneth H. Pollard Funeral Home, 233 Lawrence St. Methuen, Rev. Vicki Keene of First Church Congregational in Methuen to officiate. Interment to follow at Bellevue Cemetery of Lawrence. Per the family request, there will be no calling hours. For directions and online guestbook, please visit the funeral home website, www.pollardfuneralhome.com. The Kenneth H. Pollard Funeral home is honored to serve the Cleveland Family.

Elizabeth Morse Flanders Cleveland was born on May 9, 1916, and died peacefully on November 14, 2015. She was the daughter of William Niles Flanders and Helen Hoyt Macartney Flanders. Her younger brother, Robert Flanders died in 1942 during... View Obituary & Service Information

The family of Elizabeth Morse Flanders Cleveland created this Life Tributes page to make it easy to share your memories.