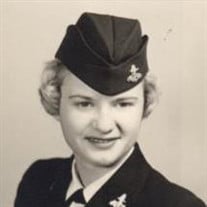 Eileen Robichaud, 84, longtime resident of Methuen, passed away peacefully at the Brockton VA Hospital on September 6, 2019. Born in Methuen on September 2, 1935 to the late Arthur J. and Edna M. (Murray) Robichaud, she attended Searles High School, graduating with the Class of 1953. Eileen was an only child, but grew up in Methuen surrounded by a large extended family, including many cousins. Like so many of her generation and a pioneer in her own right, she felt the call of duty and enlisted in the United States Navy after graduating from high school. A decorated Korean War veteran, she served honorably in a naval aviation squadron from September 8, 1953 to September 6, 1957. After her service ended she moved to California, living with her aunt's family until she found employment and housing in Torrance, CA. Returning to Methuen after her father became ill, Eileen opened a beauty salon in Methuen Square, which she owned and operated for several years with her mother's help. In the late 70s, Eileen became restless, needing academic stimulation, prompting her return to college part-time. She was very intelligent, artistic and creative. After selling her salon in the early 80s, her entrepreneur skills surfaced and she became a consultant for essential oils, among other ventures. Eileen and her mother also purchased a 23' Jamboree Camper to travel New England during their spare time. Eileen was a generous person, who loved her family. She will be lovingly remembered & missed by all of her cousins. The Robichaud family would like to personally thank the kind and caring staff at the Brockton VA’s Long Term Care Unit for the compassionate and devouted care she received for the past year. A graveside funeral service, with military honors, will be held at Elmwood Cemetery, 130 N. Lowell Street, Methuen, on Friday, September 20, 2019 at 11 AM. The Kenneth H. Pollard Funeral Home is proud to serve the Robichaud family.

The family of Eileen Robichaud created this Life Tributes page to make it easy to share your memories.