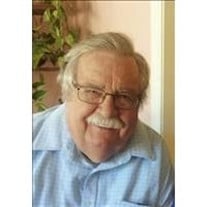 Edward S. Vollick, 77 of Methuen, MA, passed away suddenly Monday morning, December 22, 2014. Edward was born September 12, 1937 in Brantford, Ontario, Canada. Married to S. Mardelle Johnson on September 13, 1958, they were married for 54 years before she predeceased him in April 2013. Edward spent most of his years in Pennsylvania where he worked at Bessemer Cement, American Cyanamid and McCarter Tour. He has also worked for Meredith/Burda in Casa Grande, AZ. Edward has always considered Pennsylvania his home, but recently moved to Massachusetts to be close to his family. He was greatly loved and respected for his warm sense of humor and his determination to make the best of all situations. Spending time with his family and friends was his favorite pastime. Edward is survived by his sister, Carol Wilson, his four daughters, Mary Jordan, Becky Tinnon, Bonnie Hall, and Karen O'Rourke, 12 grandchildren, 2 great-grandchildren, and many extended family in both Canada and the United States. Family and friends will honor and celebrate Edward's life by gathering for calling hours at the Kenneth H. Pollard Funeral Home, 233 Lawrence Street, Methuen, MA on Tuesday, December 30, 2014 from 4-7pm, followed by his funeral service at 7pm at the funeral home. In lieu of flowers, donations can be made to the Alzheimer?s Association, 480 Pleasant Street, Watertown, MA 02472 or to the Arthritis Foundation, 29 Crafts Street, Suite 450, Newton, MA 02458. The Kenneth H. Pollard Funeral Home is honored to serve the Vollick family

The family of Edward S. Vollick created this Life Tributes page to make it easy to share your memories.