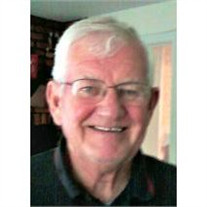 Methuen - Edward P. Barraclough, 70, of Methuen, died peacefully Tuesday, December 25 at Holy Family Hospital in Methuen after a Christmas dinner with family and friends. Edward, son of the late Clarence and Abigail (McGrogan) Barraclough, was born in Methuen on May 20, 1942. He was a graduate of Lawrence High School, class of 1960 and received his Bachelor?s degree in Accounting from Merrimack College in 1965. Edward served in the United States Air Force Reserves from 1966-1973. Prior to his retirement, he was employed with John Hancock Mutual Insurance Co. as Systems Analyst for 26 years. He then became a School Bus Driver and Driver Trainer for Trombley School Bus Company. Edward was a past member of the Methuen Knights of Columbus, was Treasurer of the Methuen Youth Hockey League and was a NASCAR enthusiast. He was an avid Rugby fan and a past member of the A.O.H., Newburyport Chapter. He will be deeply missed by his beloved wife of 47 years, Susan E. (Fitzpatrick) Barraclough; his son, Jeff Barraclough of North Beach, Hampton, NH; his daughter-in-law, Stephanie Barraclough; his son, Paul Barraclough and his wife Heather of Lexington, KY; four grandchildren, Brendan, Cora, Finley and Calvin Barraclough; one brother, William Barraclough and his wife Elizabeth of Seabrook Beach, NH; one sister, Maryann Barraclough of Seabrook Beach, NH and several loving nieces and nephews. Family and friends will gather to honor and celebrate Edward?s with a Scripture ?Service in St. Monica?s Church, 212 Lawrence St., Methuen on Saturday, December 29 at 9AM. Burial will follow in Elmwood Cemetery, Methuen. Friends will be warmly received in the KENNETH H. POLLARD FUNERAL HOME, 233 Lawrence St., Methuen from 4-8 PM on Friday. In lieu of flowers, the family suggests that contributions in his memory be made to the American Red Cross of Eastern Massachusetts, 139 Main Street, Cambridge, MA 02142. To share a condolence with the Barraclough family, please visit us online at www.pollardfuneralhome.com. The Kenneth H. Pollard Funeral Home, Methuen is honored to assist the family with arrangements.

The family of Edward P. Barraclough created this Life Tributes page to make it easy to share your memories.