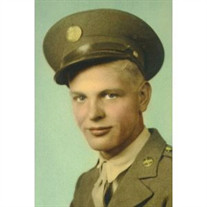 Methuen - Edmund P. (?Yank?) Yankowsky, 92 of Methuen, passed away on Thursday, February 23, 2017 at the Nevins Nursing & Rehabilitation Centre in Methuen. He was the beloved husband of the late Helen (Zak) Yankowsky. Edmund was born on July 18, 1924 in Haverhill, MA and was the son of the late Peter and Rose (Budrevich) Yankowsky. He was educated in the Haverhill School system, graduating from Haverhill High School in 1942. He attended Wentworth Institute, Boston, MA. Edmund was a member of The Greatest Generation, proudly serving in the U.S. Army?s 8th Infantry and in the US Army Air Corp?s military police during World War II from 1943-1946 in the European Theater. He saw service in England, France, Germany and Belgium. Upon his honorable discharge in 1946, Edmund received a Campaign Ribbon, an ETO Ribbon, a Victory Medal and a Good Conduct Medal. Edmund worked at the former Western Electric facility in North Andover as a layout operator for 30 years until retiring in 1983. He was a communicant of Saint Monica?s parish, the Pioneers Club of Retirees of Western Electric, Disabled American Veterans, and the Lithuanian Gedymino Club of Haverhill, MA. Edmund enjoyed swimming, cross country skiing, pottery making and good conversations with family and friends. Edmund will be deeply missed by his nephew James E. Belsky and James? wife Regina of Wilmington, MA, his niece Christine Stanley and her husband Larry of Houston, TX, his grand niece Erika L. Belsky of Waltham, MA and his grand nephew Austin T. Stanley of San Francisco, CA, all of whom affectionately referred to him as ?Uncle Yank?. He is predeceased by his sister, Aldona M. Belsky and brother-in-law, Joseph J. Belsky and his nephew, Peter J. Belsky. Family and friends will honor and celebrate Edmund?s life by gathering for calling hours at the Kenneth H. Pollard Funeral Home, 233 Lawrence Street in Methuen on Thursday, March 2, 2017 from 9:30 - 10:30 AM. His Mass of Christian Burial will be held at 11 AM on Thursday at St. Monica?s Church in Methuen. Burial will follow in Elmwood Cemetery in Methuen. In lieu of flowers, donations may be made in Edmund?s memory to: Lithuanian Children?s Fund, c/o Sisters of The Sacred Heart, 261 Thatcher Street, Brockton, MA 02302. The Kenneth H. Pollard Funeral Home is honored to serve the Yankowsky family.

Methuen - Edmund P. (?Yank?) Yankowsky, 92 of Methuen, passed away on Thursday, February 23, 2017 at the Nevins Nursing & Rehabilitation Centre in Methuen. He was the beloved husband of the late Helen (Zak) Yankowsky. Edmund was born on July... View Obituary & Service Information

The family of Edmund P. (?Yank?) Yankowsky created this Life Tributes page to make it easy to share your memories.