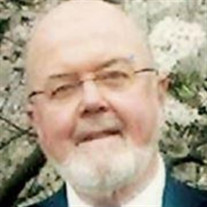 Dr. Donald J. Slipp, age 84, of Atkinson, NH passed away peacefully on March 7, 2021 with his loving partner, Susan Yerburgh, at his side. Don was born in Lawrence to the late Joseph and Dorothy (née Allicon) Slipp. He grew up in North Andover and was a graduate of North Andover High School. He graduated Magna Cum Laude from Boston College in 1958 and Tufts Medical School in 1962. Don completed his internship at Dartmouth-Hitchcock Hospital after which he was drafted as a doctor to Fort Campbell, Kentucky for two years. After completing his residency at St. Elizabeth’s Hospital in Boston, he opened his internal medicine practice in North Andover and was affiliated with Holy Family (Bon Secours) Hospital and Lawrence General Hospital. Don was Chief of the Medical Staff at Holy Family Hospital in the late 1970’s and a member of the Aesculapian Club. He was a devoted, caring doctor who was loved by his patients. In later years before his retirement, he was the company physician at Gillette in Andover, MA. Don was an avid reader with a large book collection. He was a war history buff with a special interest in the US Civil War. He enjoyed listening to and attending classical music concerts. He was a curious and, for his time, an intrepid world-traveler (Central and South America, Iron Curtain countries). His two-week sailing trips in the Caribbean with a group of colleagues were memorable. Don walked extensively in surrounding towns and kept it up until recently. He loved to drive and explore country roads while listening to educational CDs. Don was the beloved husband of the late Helen Marie “H’rie” (née McCarthy) Slipp and the late Suzanne Shuman. He is survived by his four children: Kathleen Slipp (whose wife Shan Bowers predeceased him), Ellen Slipp and her husband Jerry Bedingfield, Michael Slipp and his husband Ed Farrell, and Alison Slipp. He was the brother of Peter Slipp and his wife, Donna and the late Nancy Katin (whose husband John predeceased him). He is also survived by his grandchildren: Tess Bedingfield, Hank Bedingfield, Will Bedingfield, and Ian Slipp as well as many nieces and nephews. A graveside service will be held at a later date. In lieu of flowers, contributions in Don’s memory may be made to the Rockingham VNA and Hospice, 4 Alumini Dr. Exeter, NH 03833. For online condolences, please visit the funeral home website, www.pollardfuneralhome.com. The Kenneth H. Pollard Funeral Home is honored to serve the Slipp Family.

Dr. Donald J. Slipp, age 84, of Atkinson, NH passed away peacefully on March 7, 2021 with his loving partner, Susan Yerburgh, at his side. Don was born in Lawrence to the late Joseph and Dorothy (née Allicon) Slipp. He grew up in North Andover... View Obituary & Service Information

The family of Dr. Donald J. Slipp created this Life Tributes page to make it easy to share your memories.