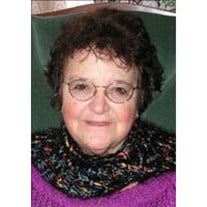 Hyannis - Dorothy (Pellerin) DiPaolo, ?Dolly?, formerly of Methuen and more recently living on Cape Cod, died peacefully on Wednesday, December 30, in Centerville. Born in Lawrence on May 28, 1929 and named Marie-Cecile Dorothy by her French-Canadian mother and father, she became known as ?Dolly? as a young child because she was so cute. The name certainly fit her cuteness throughout her entire life. During the Great Depression, her family fell on hard times and she and 3 of her siblings spent approximately 10 years under the care of the Grey Nuns at the Protectory of Mary Immaculate Orphanage in Lawrence. Her mother, Yvonne (Pouliot) Pellerin, died when Dolly was 11 years old and she and her sister Jeannine began to live on their own. As soon as she was old enough, Dolly went to work in the textile mills in Lawrence. She met Phil, who was to become the love of her life, at a birthday party when she was 17 and they married in 1947. Phil and Dolly loved roller skating, jitterbugging, and going to concerts of big bands and singers of the 40?s at the Frolics at Salisbury Beach. Phil and Dolly lived in Lawrence and later in Methuen. They had two daughters, Sandra Sullivan and Joanne O?Connell, who have numerous fond memories of a wonderful family life that included camping vacations, Sundays at the beach, extended family gatherings at ?the Camp?, and simple everyday things like shopping adventures and reading books to her grandchildren. Dolly had a rewarding and stimulating job for over 25 years at the Bon Secours Hospital in Methuen where she was a dietary aide. Upon her retirement, and as a seasonal resident of Hyannis, Dolly cherished every minute of her time with her family swimming at Craigville Beach for hours, shopping at the Christmas Tree Shops, going to Pops by the Sea concerts, boating on her namesake the ?Dolly D?, and walking hand-in-hand with Phil at Long Beach. Dolly and Phil traveled the world and shared their experiences through family slide shows of their exciting trips to Italy, Greece, Israel, Egypt, Germany, Eastern Europe, and other destinations. During the winter months, Dolly enjoyed the Gulf Coast beaches in Florida and the friendships she made with fellow ?Snowbirds.? Dolly was a sweet, gentle soul, whose favorite saying was ?Carpe Diem?. She loved being on the go and enjoying living each day to the fullest. In her later years, despite the challenges she faced with her vision and speech limitations, she continued to demonstrate her resilience and ability to find contentment and peace in her life. Throughout her life, from the Nuns at the orphanage to her fellow millworkers, to her friends and relatives, and the medical and social staff at the assisted living facilities, everybody loved Dolly. She will be greatly missed by all those who knew her, but her legacy will live on through the model she gave us all of a life well lived in so many ways. Can?t you just hear the angels welcoming her with a rendition of ?Hello Dolly? as she joins Phil in their reunion dance? Dolly was pre-deceased by Phil, who passed away four months ago. She is survived by her two daughters, Sandra Sullivan of Stoneham; Joanne O?Connell and son-in-law, Michael O?Connell, of Hyannis; grandchildren, Casey O?Connell, his wife Kelly Kodadek O?Connell, and Dolly?s great-granddaughter Mya; Joe O?Connell of Hyannis; and Caitlin Sullivan and Colin Sullivan, both of Cambridge; and nieces, nephews, and sisters-in-law. Dolly is also pre-deceased by her mother and father; brothers William, Paul, and Raymond; and sister Jeannine. Dolly?s wake will take place on Tuesday, January 5, 2015, at Kenneth H. Pollard Funeral Home, 233 Lawrence St., Methuen MA, 9:00 to 10:30 a.m. A Mass of Christian Burial will follow at 11:00 at St. Monica?s Church of Methuen. Burial will be at Elmwood Cemetery in Methuen. Memorial contributions in Dolly?s name can be made to the charity of one?s choice. For directions and online guestbook, please visit the funeral home website at www.pollardfuneralhome.com.

The family of Dorothy "Dolly" (Pellerin) DiPaolo created this Life Tributes page to make it easy to share your memories.