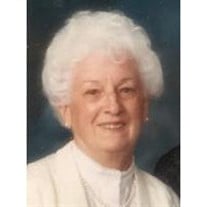 North Andover, MA ? Doris P. (Desruisseau) Morache, 95 yrs of age and wife of the late Robert Morache, died October 25, 2011 at the Prescott House in North Andover surrounded by her loving family. Born in Lawrence, December 3, 1915, Doris was the daughter of William and Clara (Monty) Desruisseau. A lifelong resident of Lawrence, Doris was formerly employed as a mender at Shawsheen Mills in Andover for many years. She left the mills in 1946 to raise her family. Doris was an attendant at Sacred Heart Church in Lawrence. She enjoyed sewing, painting, reading, and spending time with her family. Doris is survived by two daughters and their spouses, Jean M. and Michael Marcoux of Windham, NH, and Joan A. and Albert J. DeFusco of Haverhill, MA; a son and his spouse, Robert W. and Barbara Morache of Hampstead, NH; a brother, Maurice Desruisseau of Lawrence; 5 grandchildren, Michelle Grimm, William Morache, Robert Morache, Albert A. DeFusco, and Jennifer DeFusco; and 3 great grandchildren, Michael, Jessica, and Matthew Grimm. A Funeral Mass will take place on Monday at 10 AM in Saint Michael Church in North Andover. Friends will be warmly received on Sunday from 1 to 5 PM at the Kenneth H. Pollard Funeral Home, Inc., 233 Lawrence Street in Methuen. In lieu of flowers please send memorial contributions to Perkins School for the Blind, 175 North Beacon Street, Watertown, MA 02472.

The family of Doris P. Morache created this Life Tributes page to make it easy to share your memories.