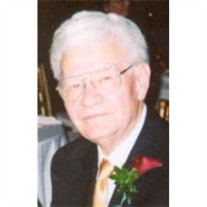 Donald J. Socia, 89, of Methuen, died peacefully on Saturday, November 17, 2012 at the Edith Nourse Rogers Memorial Veterans Hospital in Bedford, MA. He was the husband of Theresa I. (Ginchereau) Socia, to whom he was married for 66 years. Donald, son of the late Augusta and Leah Potvin) Socia, was born in Island Falls, Maine on August 24, 1923. He graduated from Island Falls High School and attended McIntosh Business College. He served in the U.S. Air Force as a corporal during World War II, where he received the Distinguished Unit Badge and five Bronze Service Star Medals for participating in five major battles. He also received a letter from Congressman Chester Atkins, congratulating him on his military service. Donald worked as foremen with Bolton-Emerson in Lawrence for 44 years until his retirement. He was a communicant of Our Lady of Good Consel/St. Theresa?s Church in Methuen. He was also a member of the Knights of Columbus in Methuen and the International Association of Machinists and Aerospace Workers. In his free time, Donald enjoyed taking walks and riding bikes with his wife, reading, taking trips to the beach and spending the winters in Florida with his wife, and and playing with his grandchildren. He was friendly and kind to people and always had a smile. Donald will be deeply missed by his wife; four sons, Ronald Socia of Virginia, Michael Socia and his wife, Carol, of Lawrence, Kenneth Socia and his longtime girlfriend, Lori, of Kittery, ME, and Steven Socia of Derry, NH; a brother, Gilbert Socia, of Methuen; 10 grandchildren; 4 great grandchildren; and several nieces and nephews. Family and friends are planning to honor and celebrate Donald?s life by gathering for visiting hours in the Kenneth H. Pollard Funeral Home, 233 Lawrence St., Methuen on Tuesday, November 20th from 4-8 pm. His Funeral Mass will be celebrated in Our Lady of Good Counsel/St. Theresa?s Church, 22 Plymouth Street, Methuen on Wednesday at 9 AM. Interment will follow in Sacred Heart Cemetery in Andover. Those who wish to make a memorial contribution in Donald?s memory in lieu of flowers are kindly asked to consider the Edith Nourse Rogers Memorial Veterans Hospital, 200 Springs Road, Bedford, MA 01730. The Kenneth H. Pollard Funeral Home, Methuen is honored to assist the Socia family with arrangements.

Donald J. Socia, 89, of Methuen, died peacefully on Saturday, November 17, 2012 at the Edith Nourse Rogers Memorial Veterans Hospital in Bedford, MA. He was the husband of Theresa I. (Ginchereau) Socia, to whom he was married for 66 years. Donald,... View Obituary & Service Information

The family of Donald J. Socia created this Life Tributes page to make it easy to share your memories.