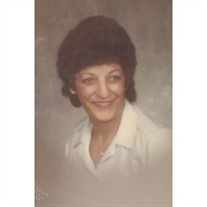 Diana V (Bogosian) Dulgarian passed away at Academy Manor on February 3, 2017. She was born in Lawrence to the late Ohan and Siranoush (Sarkisian) Bogosian on March 6 1932. She was a graduate of Lawrence High School. Diana worked in the family business in her early years. She later went to work for Raytheon in Andover as a buyer/purchaser for 35 years. She was a member of the St. Gregory Armenian Church in North Andover, and served on the Ladies Guild as President and also on the Bazaar Committee. Diana also worked bingo for 20 years in the kitchen cooking. Diana was a huge fan of the Boston Red Sox and the Patriots. She never missed watching them. Her greatest pleasure in life was when she became a grandmother to her only grandson Steven. He was the joy of her life. She also became a great grandmother to two great grandsons, Joshua and Jordan, who she loved and adored very much. In addition to her parents, Diana was pre deceased by her twin brother Armen Bogosian, and another brother, Vasken Bogosian. She is survived by her daughter Linda Baillargeon, and husband David, of Hampstead NH, grandson Steven Rinaldo, and his wife Sarah of Methuen, sister V Elizabeth Moomjian of Fairfield Ct. her 2 great grandsons Joshua and Jordan Rinaldo of Methuen, and several nieces and nephews, great nieces and great nephews and close friends. I would like to thank the Academy Manor and Compassis Hospice for the care that was given to my mother. I will miss you dearly until we meet again. Friends and guests are invited to call on Friday, February 10, 2017 from 4:00 PM until 7:30 PM at the Kenneth H. Pollard Funeral Home, 233 Lawrence St. Methuen. A funeral service will be held immediately following calling hours at the funeral home beginning promptly at 7:30 PM. Burial will be private. For directions and online guestbook, please visit the funeral home website, www.pollardfuneralhome.com. In lieu of flowers, donations made be made to Nevins Farm-MSPCA, 400 Broadway Methuen, MA 01844 or to St. Jude?s Children?s Research Hospital, 262 Danny Thomas Pl. Memphis, TN 38105. The Kenneth H. Pollard Funeral Home is honored to serve the Dulgarian Family.

Diana V (Bogosian) Dulgarian passed away at Academy Manor on February 3, 2017. She was born in Lawrence to the late Ohan and Siranoush (Sarkisian) Bogosian on March 6 1932. She was a graduate of Lawrence High School. Diana worked in the family... View Obituary & Service Information

The family of Diana V. Dulgarian created this Life Tributes page to make it easy to share your memories.

Diana V (Bogosian) Dulgarian passed away at Academy Manor on...