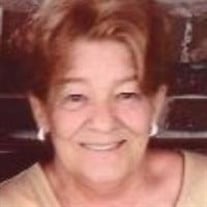 Diana “Diane” (Mottram) LaRoche, age 68 of Lawrence passed away at her late residence on September 11, 2017. Diane was raised and educated in Lawrence. She was born in Lawrence on February 26, 1949 to the late Raymond and Lorraine (Christien) Mottram. She spent her life caring and loving her five children. When she spoke about her family, you could always see that sparkle in her eyes, whether it was her children, grandchildren, or great-grandchildren. She always enjoyed the time she spent with family. Diane was always laughing and full of life, she never had a bad word to say about anyone, she loved everyone unconditionally. She always approached life with kindness, patience and a wonderful sense of humor. Diane was a woman of various interests. She loved music (especially Willie Nelson), playing games on the computer, crafts, concerts, and trips to Mohegan Sun. She loved going to her favorite club to visit her cousin, where everyone knew her as “Ma”. Diane loved her two cats, they brought her so much happiness. She even taught her cat “Baby” to open the door if she was locked out. There was several occasions when she came home and was locked out and was able to be let in the house by her cat. Diane was the beloved wife of the late Gerard LaRoche Sr. and her surviving companion Ronald Marchessault. She was the devoted mother of Lisa Monneyhan, and her fiancé Casey Thelo, Tracey Stillman and her husband Dwight, Jason LaRoche, Jeffrey Marchessault, and the late Gerard LaRoche Jr and his wife Vicky. Diane was the dear sister of Patricia Moffatt and her husband Thomas, and Pamela Waring and her husband Paul. She was the loving grandmother of Michael, Mitchell, Kristy, Rickey, Jennifer, James, Brittney, Abagail, Cerenidy, and Kayla. Diane was the cherished great-grandmother of Michael, Faith, Matthew, Destiny, Olivia, Kaeleigh, and Peyton. She is also survived by her special cousin Billy Mottram, long time special friend Christopher Cate, and several nieces and nephews. Diane will be sorely missed by her family and friends. Friends and guests are invited to call on Tuesday, September 19, 2017 from 4:00 PM until 8:00 PM at the Kenneth H. Pollard Funeral Home, 233 Lawrence St. Methuen. A Mass of Christian Burial will take place on Wednesday, September 20, 2017 at 11:00 AM at St. Monica’s Parish of Methuen. Interment to follow at Elmwood Cemetery of Methuen. The Kenneth H. Pollard Funeral Home is honored to serve the LaRoche, Marchessault and Mottram Families.

Diana &#8220;Diane&#8221; (Mottram) LaRoche, age 68 of Lawrence passed away at her late residence on September 11, 2017. Diane was raised and educated in Lawrence. She was born in Lawrence on February 26, 1949 to the late Raymond and Lorraine... View Obituary & Service Information

The family of Diana "Diane" (Mottram) LaRoche created this Life Tributes page to make it easy to share your memories.