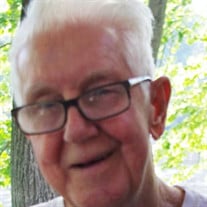 David E. Downey, age 89, died on February 20, 2022 at Country Center for Health and Rehabilitation in Newburyport after a period of decline. He was one of five children and the second-eldest son of the late Daniel F. Downey and Helen (Butterworth)... View Obituary & Service Information

The family of David E. Downey created this Life Tributes page to make it easy to share your memories.