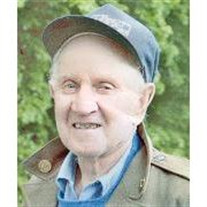 Methuen, MA- Chester J. ?Chet? Panus, 89, died Thursday, October 08, 2009 at his home. Born in Lawrence on January 27th, 1920, Chester was the son of John and Adela (Kania) Panus. Chester attended Lawrence High School and at the age of 16, joined the Civilian Conservation Corps which was part of ?The New Deal? and served in West Burke and Barton, Vermont. During World War II Chester joined the Army Air Corps and provided ground support in england for pilots flying missions in the European air offensive to Normandy, Rhineland, Ardennes, Centarl Europe and Northern France until being honorably discharged at War?s end. Talking about the War and sharing stories was something Chet loved to do. Chester had a love of air planes and for more than 15 years worked as an Aircraft Mechanic at Pratt & Whitney in Connecticut. Chet loved New England and enjoyed driving to the Green Mountains in Vermont and revisiting some of the roads and fire patrol huts he helped build while in the CCC. He enjoyed gardening and listening to talk radio, but especially enjoyed spending time with his family Chet will be deeply missed by his 4 nieces and nephews, Elaine M. Sheehy and her husband Stephen of Methuen, Joan P. Cote and her husband Alfred R. Robl of Methuen, Michael W. Cote and his wife Danielle of Phoenix, AR, and John A. Cote and his wife Caroline of Palo Alto, CA and their sons Joseph, Andrew and Charles. Chester was predeceased by his two siblings, Stanley Panus and Helen Cote. ARRANGEMENTS: Family and friends may pay their respects on Tuesday, October 13th at the Kenneth H. Pollard Funeral home 233 Lawrence St. in Methuen,from 9:00 to 10:15 AM with a Mass of Christian Burial to follow at St. Monica?s Church at 10:30 AM and burial at Bellvue Cemetery in Lawrence. As an expression of sympathy, those who wish may make donations in Chester?s name to the Elder Services of the Merrimack Valley, 360 Merrimack Street, Bldg. 5, Lawrence, MA.

The family of Chester J. Panus created this Life Tributes page to make it easy to share your memories.