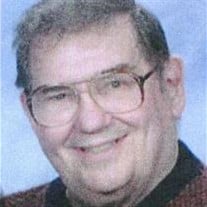 Charles Coconis, of Tewksbury, formerly of Methuen, passed away on Thursday, August 2, 2018. He was born on May 22, 1929, to Christos and Georgia (Louvaris) Coconis, and was the youngest of six children. He attended Lawrence Public Schools. Charlie proudly served as a U.S. Army Sergeant in the Korean War, and was stationed in Germany from 1951-1953. He was a longtime resident of Lawrence until 1987 when he moved to Methuen. He worked at Bolta Tire and Rubber in his early years, and for Raytheon Company in Andover as an inspector for 34 years until his retirement in 1992. Charlie is survived by his loving wife, Anne (Karamourtopoulos) Coconis; they were married for 62 years. He was a member of Sts. Constantine and Helen Greek Orthodox Church in Andover. Charlie was always the life of the party, and was a very good dancer in his day. He always enjoyed spending time with his family and was the best husband, father, father-in-law, grandfather, great-grandfather and uncle anyone could ask for. He always appreciated the simple things in life, including listening to the radio in the backyard during the summer and watching baseball on television. Charlie will always be a cherished Papou to both his grandsons, as well as their wives, whom he loved and called his granddaughters. Most recently, his pride and joy was his great-granddaughter, Lydia. Those left to cherish Charlie’s memory are his wife Anne, his daughter Georgianne and her husband Kenneth Medor of Tewksbury, grandson Joshua and his wife Joanna (Zajac) Medor of Wilmington, grandson Jeffrey and his wife Jessica (Ferreira) Medor of Tewksbury, great-granddaughter Lydia, and sister Anastasia Cullen of Lawrence. He was the brother of the late Adele Samperi, Harry Coconis, Michael Coconis, and Helen Bolt. Charlie is also survived by many friends and family, including three sisters-in-law, Thea Karamourtopoulos, Roberta Karamourtopoulos, and Doris Diamond, as well as many loving nieces and nephews. Visitors will be received at Saints Constantine and Helen Greek Orthodox Church, 71 Chandler Road, Andover on Monday, August 6, 2018, from 11:00 a.m. - 12:00 p.m., with a funeral service beginning at 12:00 p.m. Interment will be at Elmwood Cemetery, 130 N. Lowell Street, Methuen, immediately following services. In lieu of flowers, please consider a donation in Charles’ name to the Sts. Constantine and Helen Greek Orthodox Church. To leave an online condolence, please visit www.pollardfuneralhome.com. The Kenneth H. Pollard is proud to serve the Coconis family. May His Memory Be Eternal.

Charles Coconis, of Tewksbury, formerly of Methuen, passed away on Thursday, August 2, 2018. He was born on May 22, 1929, to Christos and Georgia (Louvaris) Coconis, and was the youngest of six children. He attended Lawrence Public Schools.... View Obituary & Service Information

The family of Charles Coconis created this Life Tributes page to make it easy to share your memories.

Charles Coconis, of Tewksbury, formerly of Methuen, passed away...