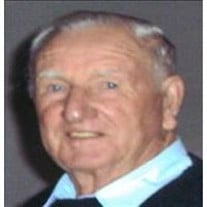 Charles A. St. Paul, age 85 of Methuen passed away on Thursday, November 26, 2015 at the Nevins Nursing Rehabilitation Centre. He was born on July 4, 1930 and was the son of the late Anthony and Lillian Santapaula. He was the beloved husband of Rita (Hopkins) St. Paul who passed away in 2012. Shortly after his graduation from Peabody High School, Charles enlisted in the United States Army to proudly serve his country during the Korean War. In 2002, Mr. St. Paul was inducted into the Peabody High School Hall of Fame for his outstanding football accomplishments. He was a graduate of Salem State College and spent most of his working career in the Lawrence School System as a teacher, and later as a guidance counselor at Lawrence High School. Charles also coached men?s varsity ice hockey and girl?s varsity softball. After his retirement, Mr. St. Paul spent many days on the golf course. He was especially proud of his hole in one at the Merrimack Valley Golf Club in 2007. Charles is survived by a son; Tim St. Paul and his wife Debbie of Manchester, NH, daughters; Judy Anderson, Justine St. Paul, and Annmarie Smith and her husband Neil, all of Methuen, sisters; Lorraine Walsh of Peabody and Mary Ann Osgood and her husband Richard of Middleton, sisters inlaw; Anne-Marie Hopkins and MaryRita Hopkins, 7 grandchildren, 4 great grandchildren and several nieces and nephews. He is predeceased by his wife Rita St. Paul, and his sister Lillian West. Friends and guests are invited to call on Monday, November 30, 2015 from 3:00 PM until 7:00 PM at the Kenneth H. Pollard Funeral Home, 233 Lawrence St. Methuen. A Mass of Christian Burial will take place on Tuesday, December 1, 2015 at 9:00 AM at St. Monica?s Church of Methuen. Interment to follow at Immaculate Conception Cemetery of Lawrence. For directions and online guestbook, please visit the funeral home website, www.pollardfuneralhome.com. The Kenneth H. Pollard Funeral Home is honored to serve the St. Paul Family.

Charles A. St. Paul, age 85 of Methuen passed away on Thursday, November 26, 2015 at the Nevins Nursing Rehabilitation Centre. He was born on July 4, 1930 and was the son of the late Anthony and Lillian Santapaula. He was the beloved husband... View Obituary & Service Information

The family of Charles A. St. Paul created this Life Tributes page to make it easy to share your memories.