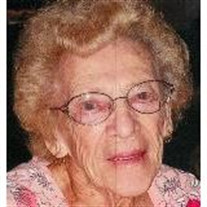 Lawrence, MA ? Cecile (Desrochers) Hennessy, Paquin, 97, a resident of MI Lawrence, formally of Andover and Methuen died Thursday at the Holy Family Hospital surrounded by her family. Cecile was born in Methuen the daughter of the late Sylvio and Arsinia (Girard) Desrochers. She was raised and educated in Methuen and a communicant of St. Monica Church for over 60 years. She was employed as a tester for the Raytheon Co. in Andover. Cecile also worked as a volunteer at The Methuen Senior Center Thrift Shop for many years. Among her many enjoyments were traveling, walking the sands of Salisbury Beach, knitting and crocheting. Because of being an only child, she cherished her large family and it was the most important part of her life. Cecile was predeceased by her husband of 61 years Ralph E. Paquin and former husband Thomas F. Hennessy, son Richard Hennessy and Great Grandson Benjamin Amiss. She is survived by six children, Thomas Hennessy and his wife Janet of the Villages, Florida, Robert and his wife Maria Hennessy of Woburn, MA, Michael Hennessy and his wife Patricia of Methuen, Charles Paquin and his wife Linda Paquin of Tewksbury, MA, Dianne Letch and her husbansd Alan of the Villages, Florida, Mary Ann Bergeron and her husband Ronald of Methuen, 18 grandchildren, 33 great grandchildren, and 2 great great grandsons. Cecile also leaves two sister-in-laws, Pauline Duffy and Angie Paquin of Lowell and many nieces and nephews. A Mass of Christian burial will take place on Tuesday morning January 11th at 11 o?clock in Saint Monica?s Church in Methuen with burial to follow in Elmwood Cemetery. Friends will be warmly received on Monday January 10th from 4 ?8p.m. at the Kenneth H. Pollard Funeral Home, Inc. 233 Lawrence Street in Methuen. In lieu of flowers memorial donations can be made in Mrs. Paquin?s name for research to find a cure for ?Spinal Muscular Atrophy? at; The SMA Foundation, 888 seventh avenue Suite 400, New York, NY 10019.

Lawrence, MA ? Cecile (Desrochers) Hennessy, Paquin, 97, a resident of MI Lawrence, formally of Andover and Methuen died Thursday at the Holy Family Hospital surrounded by her family. Cecile was born in Methuen the daughter of the late Sylvio... View Obituary & Service Information

The family of Cecile Paquin created this Life Tributes page to make it easy to share your memories.