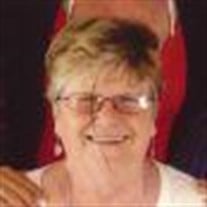 Carol A. (Gauthier) Marion, 76, of Methuen, passed away at the Merrimack Valley Hospice House in Haverhill on December 28, 2017 surrounded by her devoted family. Carol was born on August 10, 1941 to her late parents, Leo and Ester (Pulman) Gauthier in Lawrence, MA. Raised and educated in Lawrence, she worked for many years at the Woodmill Nursing Home until her retirement. Carol married her sweetheart, the late Raymond Marion Sr, and settled in Lawrence to raise her family. Known as the matriarch of her large family, she was considered the heart and soul that gave strength and guidance to all, while enjoying every moment. A devout Catholic, Carol was a communicant of Saint Monica’s Church in Methuen. She enjoyed bowling, playing “45’s”, bingo and was very socially active in the community. Carol touched many lives and will fondly be loved, cherished, and missed. Carol was the beloved mother to her six children; her daughter, Debbie Solomon of Derry, NH, her son, Raymond Marion Jr. of Boston, her son, William Marion of Boston, her daughter, Donna McLlarky and her husband Bruce of Salem, NH, her son Steven Marion and his wife Kim of Derry, NH, and her daughter Gina Caron and her husband Jimmy of Methuen. She was the proud grandmother and great-grandmother to her 20 grandchildren and 33 great-grandchildren. Carol is also survived by her brother Chester Gauthier of Salem, NH, many nieces and nephews and her former son-in-law Chief Joseph Solomon. In addition to her parents and husband, she was preceded in death by her two granddaughters Debbi and Carol McLlarky, and her two sisters Shirley Huntress and Leona O’Connor. Visitation for Carol will be on Wednesday, January 3, 2018 from 4 – 8 PM at the Kenneth H. Pollard Funeral Home, 233 Lawrence Street, Methuen. Friends and family are cordially invited to attend. A Mass of Christian Burial will be celebrated at Saint Monica’s Church on Friday, January 5, 2018 at 12:30 PM. Interment to follow at Forest Hills Cemetery in Derry, NH. To leave an online condolence please visit www.pollardfuneralhome.com. The Kenneth H. Pollard Funeral Home is proud to serve the Marion family.

Carol A. (Gauthier) Marion, 76, of Methuen, passed away at the Merrimack Valley Hospice House in Haverhill on December 28, 2017 surrounded by her devoted family. Carol was born on August 10, 1941 to her late parents, Leo and Ester (Pulman) Gauthier... View Obituary & Service Information

The family of Carol A. (Gauthier) Marion created this Life Tributes page to make it easy to share your memories.