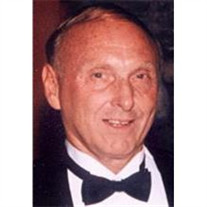 Methuen, MA- Carl W. Woekel, Jr., 80, died Wednesday September 30, 2009 at the Caritas Holy Family Hospital surrounded by those he loved. Born on July 30th, 1929 in Lawrence, Carl was the son of Carl and Mildred (Fickenwirth) Woekel. He was a graduate of Searle?s High School in Methuen and then went on to attend Northeastern University where he graduated with an Associate?s Degree in Engineering and a Bachelor?s of Business Administration in Engineering. In 1951 Carl joined the Navy where he served his country during the Korean War prior to being honorably discharged in 1952. For many years Carl was the president of Carl Woekel and Son. Inc., Contractors, a family business that spanned 3 generations. Carl was a National Director of the Jaycees. He was active in local politics; he was a town meeting member and a Methuen Town Council President, President of the Methuen Board of Trade and Director and Vice Chairman of the Nevins Memorial Library. Carl was a longtime member of Christ United Methodist Church, Lawrence. He is survived by his beloved wife of 53 years, Ruth (Wells) Woekel of Pelham, NH. Survivors also include his daughter Karen and her husband Michael Jerz and his grandson Christopher, of Methuen, his sister Janet Milnes and her husband Chester of Bedford, NH, niece Susan Milnes of Cape Elizabeth, ME, nephew, Peter Milnes and his wife Robin, his grand-nephew?s Brook and Andrew and his grand-niece Meredith. ARRANGMENTS: Family and friends may pay their respects on Sunday, October 4th, from 1-4 and 6-9 at the Kenneth H. Pollard Funeral Home 233 Lawrence St., Methuen. A Funeral Service will take place on Monday, October 5th at 10 AM at the Funeral Home with Burial to follow at Elmwood Cemetery in Methuen. As an expression of sympathy, those who wish may make donations in Carl?s name to the Nevins Memorial Library 305 Broadway, Methuen 01844.

Methuen, MA- Carl W. Woekel, Jr., 80, died Wednesday September 30, 2009 at the Caritas Holy Family Hospital surrounded by those he loved. Born on July 30th, 1929 in Lawrence, Carl was the son of Carl and Mildred (Fickenwirth) Woekel. He was... View Obituary & Service Information

The family of Carl W. Woekel, Jr. created this Life Tributes page to make it easy to share your memories.