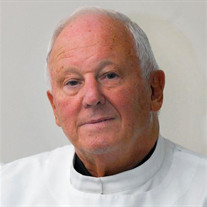 Father Brian Marggraf, SSCC, an ordained member of the Congregation of the Sacred Hearts of Jesus and Mary-United States Province, passed away early on Saturday morning, November 24, 2018, at Our Lady’s Haven Nursing Home, in Fairhaven, Massachusetts, where he had resided for the last several months. Father Brian, who celebrated his 90th birthday on June 27, was born to Herman and Margaret (Gilcrest) Marggraf in Lawrence, Massachusetts, in 1928. In addition to his SSCC family, he is survived by his brother Paul Marggraf and sister Barbara Teutonico, brother in-law William O’Donnell, along with several nieces and nephews. He was predeceased by his sister Maggie O’Donnell in 2016. In September 1949, Fr. Brian entered the novitiate of the Congregation of the Sacred Hearts, in Fairhaven, Massachusetts, and professed his first vows on September 14, 1950. He was ordained a Deacon in November 1954 and was ordained to the priesthood on June 17, 1955 at Queen of Peace Seminary in Jaffrey, New Hampshire. During his first year of ministry, Fr. Brian was a teacher at the Congregation’s minor seminary in Honolulu, Hawaii. Then, in 1957, he was assigned to the Province’s Mission in Japan. He served for thirty years as parochial Vicar and Pastor of a number of churches administered by the Congregation throughout the country and always fondly remembered his ministry there. Following his return to the US, he was assigned to St. Mary’s Church, in Fairhaven, for a short time before transferring to St. Joseph’s, in Fairhaven, where he was Parochial Vicar for eight years. In 1995, he traveled to the SSCC mission churches in Nassau, Bahamas where he remained for three years before finally coming back to Fairhaven to retire at Damien Residence, in 1998. Like all of his brothers, retirement did not mean Fr. Brian was not still ministering to the people he had come to know in the area, and so for the next 13 years he could be found helping out at St. Mary’s Church in varying capacities on weekends or traveling around New England to preach mission appeals for the Congregation’s foreign missions. The Congregation of the Sacred Hearts extends their sincere thanks to the staff both at Damien Residence, who cared for Fr. Brian as his health deteriorated, and at Our Lady’s Haven Nursing Home for the kindness shown to him. A Funeral Mass will be celebrated at St. Joseph Church, in Fairhaven, Massachusetts, on Wednesday, November 28, 2018, at 10:00 AM, followed by burial in the Sacred Hearts Community Cemetery. Visiting hours will take place at St. Joseph prior to the funeral, beginning at 9:00 AM. A Memorial Mass to honor Fr. Brian will be held at St. Monica’s Parish, Methuen on Saturday, December 15, 2018 at 11:00 AM. In lieu of flowers, donations may be made to the Sacred Hearts Community at Damien Residence, 73 Adams Street, PO Box 111, Fairhaven, MA 02719. Funeral arrangements are being handled by Fairhaven Funeral Home, www.hathawayfunerals.com.

Father Brian Marggraf, SSCC, an ordained member of the Congregation of the Sacred Hearts of Jesus and Mary-United States Province, passed away early on Saturday morning, November 24, 2018, at Our Lady&#8217;s Haven Nursing Home, in Fairhaven,... View Obituary & Service Information

The family of Fr. Brian Marggraf SSCC created this Life Tributes page to make it easy to share your memories.

Father Brian Marggraf, SSCC, an ordained member of the Congregation...