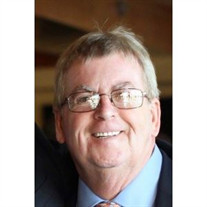 Bradford T. Compton, 67, of Salem, NH will be remembered as a devoted family man who set the standards of being a husband and father. He passed away unexpectedly on February 22, 2017 while vacationing in Naples, FL with his wife, Carolyn. A proud U.S. Army Veteran, Brad was born in Fall River, MA, where he spent much of his childhood before moving to Sparta, NJ then Ogdensburg, NJ. Brad retired from many years of employment with Raytheon and, most recently, as a sales professional for Toyota and Mercedes-Benz. In their retirement, he and his wife enjoyed spending winters in Naples, FL basking in the warm glow of the southern sun. Brad taught his children many lessons, the two most important being that family is everything and being a New England sports fan is something to be taken seriously. He was a man that touched many lives, directly and indirectly, and he will be very missed. Brad is survived by his loving and devoted wife Carolyn Compton. He was the cherished father to his four children; his daughter, Martha Compton of Athens, OH, his daughter, Rebecca Koerber and her husband Timothy of Colorado Springs, CO, his son, Thomas Compton and his wife Kristin of Charlestown, MA, and his step-daughter Kristen Cook and her husband Donald of Danville, NH. Brad was a proud and loving grandfather to his four grandchildren; Noah, Brenna, Maia, and Katie. He is also survived by his brother, John Compton of Blairstown, NJ, and many loving nieces and nephews. Bradford was preceded in death by his parents Benjamin F. Compton and Kathleen M. Compton (nee Fallon). Visitation for Brad will be held Saturday, March 4, 2017 from 1:00-4:00 PM at the Kenneth H. Pollard Funeral Home, 233 Lawrence Street, Methuen, MA. Friends and family are cordially invited to attend. To honor Brad's wishes interment will be private. The family asks that in lieu of flowers, donations to the American Heart Association be made in Brad's memory. Online condolences can be given at http://www.pollardfuneralhome.com. The Kenneth H. Pollard Funeral Home is proud to serve the Compton family.

Bradford T. Compton, 67, of Salem, NH will be remembered as a devoted family man who set the standards of being a husband and father. He passed away unexpectedly on February 22, 2017 while vacationing in Naples, FL with his wife, Carolyn.... View Obituary & Service Information

The family of Bradford Compton created this Life Tributes page to make it easy to share your memories.