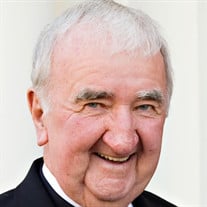 Bernard Francis Farley, 86 of Methuen, passed away peacefully on Friday, November 17, 2017 at his home with his family by his side. He was the beloved husband of Ann M. (Rogers) Farley, to whom he was married for 44 years. Bernard was born in Manhattan, NY on July 9, 1931, the son of the late Bernard Michael and Madeline (McKee) Farley. He was raised and educated in the Bronx, attended Morris High School and eventually graduated from the Rhodes School. He attended New York University School of Engineering, and he proudly served his country in the U.S. Airforce during the Korean War. He worked as a publications engineer with the Raytheon Company in Andover for over 30 years until his retirement. He then worked part time for the IRS in Andover for a couple of years following his retirement. Bernard loved sports. He played locally in a softball league and also played tennis at Cedardale Health and Fitness in Haverhill, where he was a member. He was a fierce competitor and played sports into his early 80’s. He also loved to travel. He traveled throughout North America and to over 30 countries abroad. Bernard will be deeply missed by his wife, Ann; 4 children, Suzanne Erickson and her husband Scott of Andover, Brian Farley and his wife, Gonny of the Netherlands, Michael Farley and his wife, Holly of Nashville, TN, and Sean Bernard Farley of Methuen; 5 grandchildren, Summer Farley Erickson, Dylan Barns Farley, Landon Michael Farley, Lillian Barbara Farley, and Benjamin Thomas Farley; his brother, Gerard Farley and his wife, Hannelore of the Bronx, NY; his sister, Madeline Farley of the Bronx, NY; and several nieces and nephews. He is predeceased by his sister, Virginia Lorraine Farley. Family and friends will honor and celebrate Bernard’s life by gathering for his calling hours on Sunday, November 19, 2017 from 2 to 6 PM at the Kenneth H. Pollard Funeral Home, 233 Lawrence Street, Methuen. His Mass of Christian burial will be celebrated at 11 AM on Monday at St. Monica’s Church, 212 Lawrence Street, Methuen. Burial will be private and at the convenience of the family. In lieu of flowers, memorial contributions can be made to the Veterans Northeast Outreach Center, 10 Reed Street, Haverhill, MA 01832 or to the American Heart Association, 300 5th Avenue, Waltham, MA 02451. For directions and online guestbook, please visit www.pollardfuneralhome.com. The Kenneth H. Pollard Funeral Home is honored to serve the Farley family.

Bernard Francis Farley, 86 of Methuen, passed away peacefully on Friday, November 17, 2017 at his home with his family by his side. He was the beloved husband of Ann M. (Rogers) Farley, to whom he was married for 44 years. Bernard was born... View Obituary & Service Information

The family of Bernard Francis Farley created this Life Tributes page to make it easy to share your memories.