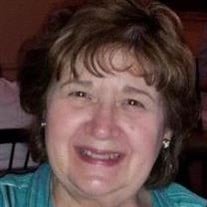 Bernadette (Elliott) Wizboski, 75, of Methuen, formerly of North Reading, passed away on January 2, 2018, at St. Elizabeth Medical Center surrounded by her devoted family. Bernadette was born on December 29, 1942 to her hardworking parents, the late Francis J. and Dora S. (Barretto) Elliott Sr. in Dorchester, MA. Raised and educated in Dorchester, she graduated with the Class of 1960 from Monsignor Ryan Memorial High School. After graduation, Bernadette married her sweetheart in a simple ceremony on June 18, 1966. She and her husband settled in North Reading to raise their family. Bernadette worked for many years as a customer service agent for Delta Airlines until her retirement. A lifelong devout Catholic she was a communicant for Saint Monica’s. As the celebrated matriarch of her family, she was completely devoted to her children and grandchildren. Bernadette was an avid reader, was very generous and was completely selfless with her time and endeavors. She touched many lives in many different circles and will fondly be loved, cherished, and missed by all. Bernadette is survived by her five beloved children; her son, Chester J. Wizboski Jr of Littleton, MA, her son, Francis J. Wizboski and his wife Maria of Methuen, her daughter, Bernadette Haidaczuk, NH, her son, Wayne Wizboski and his wife Hollie, and her son, John D. Wizboski and his wife Elizabeth all of Hudson, NH. She was the proud grandmother to her 11 grandchildren; Kenneth, Francis Jr and wife Keyla, Alexis, Hailey, John, Jack, Katherine, Michael, Derek, Johanna and Erik. Bernadette was the cherished sister to her seven siblings; Florence Ayers, Doreen McCarthy, Mary Ferrari, Joan Farahmand, Heather Iglesias, Theresa Strangie, and Francis J. Elliot Jr. She is also the proud aunt to many nieces and nephews. Bernadette was preceded in death by her beloved husband, Chester “Chet” Wizboski Sr, in 2014. Visitation for Bernadette will be held on Sunday, January 7, 2017 from 1 – 5 PM at the Kenneth H. Pollard Funeral Home, 233 Lawrence Street, Methuen. Friends and family are cordially invited to attend. A Mass of Christian Burial will be celebrated on Monday, January 8, 2018 at 9 AM at Saint Monica’s Church, 212 Lawrence Street, Methuen. Interment to follow at Elmwood Cemetery, 130 N. Lowell Street, Methuen. In lieu of flowers, please make a contribution in Bernadette’s memory to the Multiple Myeloma Research Foundation, 383 Main Avenue, 5th Floor, Norwalk, CT 06851. To leave an online condolence, please visit www.pollardfuneralhome.com. The Kenneth H. Pollard Funeral Home is proud to serve the Wizboski family.

Bernadette (Elliott) Wizboski, 75, of Methuen, formerly of North Reading, passed away on January 2, 2018, at St. Elizabeth Medical Center surrounded by her devoted family. Bernadette was born on December 29, 1942 to her hardworking parents,... View Obituary & Service Information

The family of Bernadette (Elliott) Wizboski created this Life Tributes page to make it easy to share your memories.