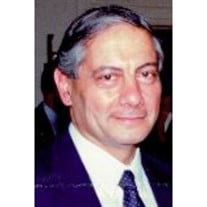 Berge M. Nalbandian, 84, of Chester, NH, passed away on July 28, 2017. He was the beloved husband of Dusty Nalbandian to whom he was married for 24 years. He was most proud of his Armenian heritage and the cherished memory of his loving parents, Malcolm and Alice Nalbandian. Berge was the owner-president of Berge?s Real Estate and Construction Company located in Salem, NH, and his daughter Vici Kramar continues in his footsteps. Founded in 1956, Berge?s successfully remains the longest running real estate company in Salem. Berge held many positions during his lifetime. He served on the board of the New Hampshire Real Estate Commission for 10 years; was the co-founder and vice-president of the Greater Salem Board of Realtors where he later served as president; helped found the Rockingham County Trust Co. where he served as a director; was on the board of directors of Bon Secours Hospital; a board member of Castle Junior College; trustee for the Valley Regional Health Care Foundation; president of the Salem Kiwanis Club; member of the American Cancer Society Rockingham West Unit and was a major contributor to the annual Night at the Races Fundraiser. Berge worked cooperatively with the Salem Exchange Club with their annual Christmas tree sale; was a member of the New Hampshire Bektash Shriners; a member of the Rockingham County Hospice; and in his later years, as a chaplain at the Lahey Clinic. In the midst of his success in business, Berge was never happier than when he was extending a compassionate, helping hand to others. When Berge was once asked how he was able to do so much, he replied, ?People have always been good to me, and I want to give something back. The satisfaction and enjoyment I get through helping people and being involved in my community keeps me going.? Berge loved to cook classic Armenian cuisine, and he was happiest sitting at a meal, surrounded by family and friends. He enjoyed tending his beautiful rose bushes at his Chesterfield Farm in Chester, NH. Berge was a devout Christian who spent time daily in Bible study and prayer. He lived his faith through a life marked by loyalty, honesty, and integrity. Berge is survived by his daughter, Vici Kramar, of Salem, NH, and her sons Lazzarus, Zachary, and Christian Kramar; his son, Mark Nalbandian, of Manchester, NH, and his daughters Noelle Doucette and Candice Nalbandian; his stepson, Brian Davis and wife, Alicia, of Aurora, CO, and their sons Vincent and Maxwell; and his step-daughter, Chali Davis of Chester, NH, and her children Taylor, Jodie, and Jessica Masotta and Danielle Conrad. Berge was the proud great-grandfather of Lukas Doucette. He was also the brother of Sonia Bagdoian, of Methuen, MA, and the uncle of Allison and Tom Brunelle of Salem, NH, and their children Jack, Alec, and Alanna; Jake Bagdoian, of Methuen, MA; and Noelle and Eddie Bonaccorsis and children Fallon, Nicholas, Isabella, Roco, and Trey. Also dear to Berge were the extended members of the Nalbandian family and those friends he held close to his heart: Nancy Bilodeau, who was a second daughter to him; Nancy Mosher; Carl and Jeanette Berhman and family; Earle Andrews; Mitchell Nakley; Kenny Yamien; and members of the Stoneham and Derry Seventh-day Adventist Churches. Calling hours for Berge will be held at The Kenneth H. Pollard Funeral Home, 233 Lawrence Street, Methuen, MA, on Wednesday, August 2, from 4-8 p.m. The funeral will be held at the Merrimack Valley Seventh-day Adventist Church, 408 Broadway Rd, Dracut, MA, on Thursday, August 3, at 10:00 AM., interment to follow at the Great Hill Cemetery on 89 Sandown Road, Chester, NH. In lieu of flowers, donations can be made in Berge?s memory to either Operation Christmas Child through Samaritan?s Purse, St. Ann?s Home, 100A Haverhill St, Methuen, MA 01844 , or to the Lazarus House, 412 Hampshire St, Lawrence, MA 01841. The Kenneth H. Pollard Funeral is proud to serve the Nalbandian family.

Berge M. Nalbandian, 84, of Chester, NH, passed away on July 28, 2017. He was the beloved husband of Dusty Nalbandian to whom he was married for 24 years. He was most proud of his Armenian heritage and the cherished memory of his loving parents,... View Obituary & Service Information

The family of Berge Nalbandian created this Life Tributes page to make it easy to share your memories.