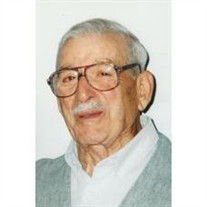 Benedetto J. Sanguedolce, 97, a long time resident of Methuen, died peacefully at home on Thursday, October 4, 2012. Benedetto, son of the the late Filippo and Santa (Romano) Sanguedolce, was born in Lawrence on July 23, 1915. He was husband of the late Celia (Rossi) Sanguedolce and the late Rita (Grenier) Sanguedolce. He enjoyed being a chef and baker and was owner of the former Dolce?s Restaurant on Common Street for many years prior to his retirement in 1976. Benedetto proudly served our country in the United States Army during World War II. He was a member of the Lawrence Council #67 Knights of Columbus of Lawrence, and the Veterans of Foreign Wars. Benedetto will be deeply missed by his three sons; Donald Sanguedolce and his wife Rita of Parrish, FL, John Sanguedolce and his wife Joyce of Punta Gorda, FL and Frederick Sanguedolce and his wife P. Gail of Methuen; one brother, Santo Sanguedolce and his wife Pauline of Methuen; eight grandchildren, Donna Bellandi, Diane, Robert, John, Frederick, Jr. and Lauren Sanguedolce, Gina Dechane and Cynthia Messerli; fourteen great grandchildren, Melissa Bellandi, Jessica Duffer, Christopher and Eric Dechane, Marco and Adriana Sanguedolce, Benjamin and Forrest Grevelis, Natalie, Nikki, Gannon and Kierra Messerli, Cecelia and Angela Garozzo, one great great grandson, Ryder Lane and several nieces and nephews. He was predeceased by brothers and sisters, James, Sebastiano, Frank, Anthony, Orlando, Mary, Rose and Jennie. Family and friends will celebrate and lovingly remember Benedetto?s life by gathering for his funeral service in the Kenneth H. Pollard Funeral Home, 233 Lawrence St., Methuen on Tuesday, October 9, 2012 at 12 PM. Burial will follow in Bellevue Cemetery, Lawrence. Friends will be warmly received at the funeral home on Tuesday, October 9 from 10 AM - 12 PM. In lieu of flowers, the family suggests that contributions in his memory be made to Mary Immaculate Nursing and Restorative Center, Zero Bennington St., Lawrence, MA 01841. For directions or to share a condolence with the Sanguedolce family, please visit us online at www. pollardfuneralhome.com. Kenneth H. Pollard Funeral Home of Methuen is honored to assist the Sanguedolce family with arrangements.

Benedetto J. Sanguedolce, 97, a long time resident of Methuen, died peacefully at home on Thursday, October 4, 2012. Benedetto, son of the the late Filippo and Santa (Romano) Sanguedolce, was born in Lawrence on July 23, 1915. He was husband... View Obituary & Service Information

The family of Benedetto J. Sanguedolce created this Life Tributes page to make it easy to share your memories.