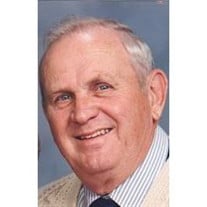 Lawrence, Ma. ? Arthur M. ?Mike? Johnson 81 years young died September 11, 2011 at the Merrimack Valley Hospice House in Haverhill with his loving family by his side. A lifelong resident of Lawrence, Arthur was born July 6, 1930 the son of Frank and Agnes (Driscoll) Johnson. For 26 years he had been employed as a truck driver with the Exxon, Company and had various jobs as a truck driver before retiring in 1991. He was educated in the Lawrence School system. He was a lifelong Communicant of Saint Patricks Church of South Lawrence. Arthur served his country as a veteran of the United States Army prior to being honorably discharged. Survivors include his wife of 54 years Delores (Chaisson) Johnson of Lawrence. 2 daughters Colleen M. and her husband Timothy Fitzpatrick of Salem, NH, Sharon A. and her husband Kevin Sumner of Lawrence, sons Michael D. and his wife Kelley Johnson of Salem, NH, and Kevin M. and his wife Jane Johnson of Salem, NH., 2 sisters Doris Skusevich of Methuen, and Claire Paine also of Methuen, 5 grandchildren Meaghan and Timothy Fitzpatrick, Rhiannon Sumner, Michaela Johnson, and Amanda Hillard, 1 greatgrandson Michael Fitzpatrick and several nieces and nephews. A Funeral Mass will take place on Thursday morning at 11 o?clock in Saint Patricks Church in South Lawrence. Friends will be warmly received on Wednesday from 4-8 p.m. at the Kenneth H. Pollard Funeral Home, Inc. 233 Lawrence Street in Methuen. In lieu of flowers memorial contributions may be made to the American Cancer Society Memorial Giving Program, 30 Speen St. Framingham, Ma.01710 and the Merrimack Valley Hospice House 360 North Street Haverhill, Ma. The Johnson family would like to say a special thank you to Merrimack Valley Hospice House staff and Dr. Vartan Yeghiazarian, MD.

Lawrence, Ma. ? Arthur M. ?Mike? Johnson 81 years young died September 11, 2011 at the Merrimack Valley Hospice House in Haverhill with his loving family by his side. A lifelong resident of Lawrence, Arthur was born July 6, 1930 the son of... View Obituary & Service Information

The family of Arthur "Mike" Johnson created this Life Tributes page to make it easy to share your memories.